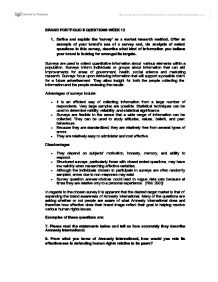 BRAND PORTFOLIO II QUESTIONS WEEK 12 1. Define and explain the 'survey' as a market research method. Offer an example of your brand's use of a survey and, via analysis of select questions in this survey, describe what kind of information you believe your brand is looking for amongst its targets. Surveys are used to collect quantitative information about various elements within a population. Surveys inform individuals or groups about information that can aid improvements for areas of government, health, social science and marketing research. Surveys focus upon retrieving information that will support a possible claim for a future advertisement. They allow insight for both the people collecting the information and the people reviewing the results. Advantages of surveys include: * It is an efficient way of collecting information from a large number of respondents. Very large samples are possible. Statistical techniques can be used to determine validity, reliability, and statistical significance. * Surveys are flexible in the sense that a wide range of information can be collected. They can be used to study attitudes, values, beliefs, and past behaviours. * Because they are standardized, they are relatively free from several types of errors. * They are relatively easy to administer and cost effective. ...read more.

LECTURE 10 BRAND PORTFOLIO QUESTIONS 2. Outline one key benefit of and one key problem with advertising in magazines. Select one of your brand's magazine advertisements [include ad if possible] and offer your own suggestion as to which market segment it is targeting [and explain why you think this is the case]. ADVANTAGE: Target a specific customer base: Magazines and trade publications give you the opportunity to reach your target audience with concise precision. Magazines offer large, defined readers that allow you to focus on your particular demographic or group. While many people read the local newspaper, only those individuals who are interested in a specific topic or industry (eg. electronics, cars, fashion or holidays) will subscribe to a particular magazine. DISADVANTAGE: Limited flexibility: Magazines generally do not offer the same flexibility in terms of ad placement or format. Most magazine advertisements will be of the same size (A4) and when compared to television, radio and even billboards magazines fall short. Television, radio and billboards have a wide variety of advertisement opportunities, advertisement sizes and placement options. Thus magazines tend to be far more limited in what they are able to offer. The chosen advertisement focuses on the torture of a young girl by soldiers in Mexico. ...read more.

Due to globalisation the manner in which the world interacts has become more and more interdependent. Therefore the way that groups such as Amnesty International work has become expansive when attempting to resolve injustices in all countries. Thus the standards of human dignity need to be met and an understanding of how human rights intersect within the global economy (aid, trade and commerce) also need to come into account. In regards to Amnesty and how it adheres to the concept of CSR it is apparent that Amnesty works in conjunction with the concepts of CSR. The manner in which Amnesty goes to countries in order to put a stop to human right violations is a clear indicator of trying to put a stop to social impacts that are apparent in their country. This also reflects the positive steps towards a more fair economy as the idea that Amnesty pushes of how government's need to consider more than the legal minimum standards helps to create a just societwy. The way in which Amnesty's mission statement reflects the ideas of corporate social responsibility is apparent with elements such as "a world in which every person enjoys human rights". Amnesty strives for a better world one that operates in a manner not interested in financial implications but one that supports positive social and environmental impacts for all members of the community. ...read more.