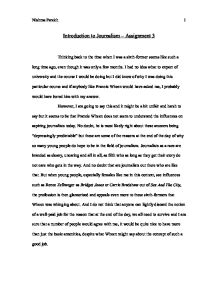 Introduction to Journalism - Assignment 3 Thinking back to the time when I was a sixth-former seems like such a long time ago, even though it was only a few months. I had no idea what to expect of university and the course I would be doing but I did know of why I was doing this particular course and if anybody like Francis Wheen would have asked me, I probably would have bored him with my answer. However, I am going to say this and it might be a bit unfair and harsh to say but it seems to be that Francis Wheen does not seem to understand the influences on aspiring journalists today. No doubt, he is most likely right about these answers being "depressingly predictable" but these are some of the reasons at the end of the day of why so many young people do hope to be in the field of journalism. Journalists as a race are branded as sleazy, uncaring and all in all, as filth who as long as they get their story do not care who gets in the way. ...read more.

I do not think anyone can deny the fact the media in general has such a big influence in our life. And maybe one day, I might be part of that influence, as it is an extremely powerful tool which can be used in good and bad ways. And, as a result of doing Politics A-Level, I became extremely interested in current affairs and felt that as I do live in this world, I should be aware of what was happening around me and if I possibly could also take a part in it as well. So from my rather attention seeking aspirations of being on television, I realised that I now wanted to be still at the forefront but all of my interests and hopes coincided together and made me realise I wanted to be a part of the constantly changing world of media and journalism and become a broadcast journalist. I want to be one of the first people to see events of the world occur, whatever they may be, so that in some way I become part of history and a part of what happens. ...read more.

However, when all's said and done, the one quality that I respect the most in any journalist is honesty and the motivation to be frank and open about any subject or topic, no matter what it may be. As a country that has a great deal of freedom, we take this for granted but worldwide this is not the same, and for a journalist to tell the truth in certain countries, despite the risks, is extremely bold and daring. I feel it is too early to really say if my aims and ambitions have changed as it is only the start of the course. However, if I were to be asked that question in 3 years time, then maybe my answer will be different but for now my wish to be a broadcast journalist remains, as this is something that I have aspired to, for a long time. Something that has changed is that I have realised that if I do not reach my ultimate goal of being broadcast journalist then I would have no qualms about being or doing something else in the field of journalism. Therefore, I am content with the course and what is required of me and the reasons why I chose to do journalism have not changed. Nishma Parekh 1 ...read more.