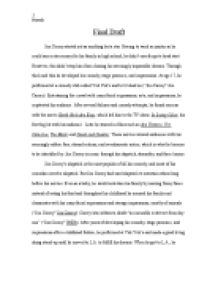 ﻿Marsh hi Final Draft Jim Carrey started out as anything but a star. Having to work as janitor so he could earn extra money for his family in high school, he didn?t exactly get a head start. However, this didn?t stop him from chasing his seemingly impossible dreams. Through thick and thin he developed his comedy, stage presence, and impressions. At age 17, he performed at a comedy club called Yuk Yuk?s and hit it dead on (?Jim Carrey? Jim Carrey). Entertaining the crowd with crazy facial expressions, acts, and impressions, he captivated his audience. After several failures and comedy attempts, he found success with the movie Earth Girls Are Easy, which led him to the TV show, In Living Color, his first big hit with his audience. Later he starred in films such as Ace Ventura: Pet Detective, The Mask, and Dumb and Dumber. These movies wowed audiences with his seemingly rubber face, absurd actions, and overdramatic antics, which is what he became to be identified by. Jim Carrey is iconic through his slapstick, absurdity, and farce humor. Jim Carrey?s slapstick is the most popular of all his comedy, and most of his comedies involve slapstick. ...read more.

Ace Ventura: Pet Detective was a perfect example of his very unique style of comedy, exhibiting his ?face like Silly Putty, and [his] vivacious verbal velocity? (?Jim Carrey? 501 Movie Stars). In the same year he also came out with The Mask, a movie in which ?the idea was to make the audience unsure of where [his] crazy facial expressions leave off and the special effects begin? (qtd. in ?Jim Carrey? Biography Today). Another hit, Jim Carrey was climbing the ladder up to America?s most popular actor in a very short time. His slapstick humor had served him well in creating his career and shooting it up to the top of the charts. Not all of Carrey?s humor was through slapstick. He also used absurdity to amuse audiences, and it worked. All through his life he had paired his slapstick with absurdity to make his funniest moments funnier. In fact, his slapstick comedy was often absurd in many ways. Random reactions to certain situations proved to be quite entertaining for viewers. Later in his stand-up career, mainly during his experimentation period, he would try different examples of absurdity, again, some bombing and some successful, but his first absurdity comedy film was in 1994, when he starred in Dumb and Dumber. ...read more.