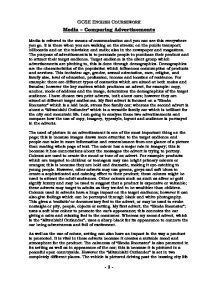 GCSE ENGLISH COURSEWORK Media - Comparing Advertisements Media is referred to the means of communication and you can see this everywhere you go. It is there when you are walking on the streets; on the public transport; billboards and on the television and radio; also in the newspaper and magazines. The purpose of advertisements is to persuade people to purchase their product and to attract their target audience. Target audience is the client group which advertisements are pitching to, this is done through demographics. Demographics are the characteristics of the population which influences consumption of products and services. This includes: age, gender, sexual orientation, race, religion, and family size, level of education, profession, income and location of residence. For example: there are different types of cosmetics which are aimed at both males and females; however the key matters which produces an advert, for example: copy, anchor, mode of address and the image, determines the demographics of the target audience. I have chosen two print adverts, both about cars; however they are aimed at different target audiences. My first advert is focused on a "Skoda Roomster" which is a laid back, stress free family car; whereas the second advert is about a "Mitsubishi Outlander" which is a versatile family car which is brilliant for the city and mountain life. I am going to analyse these two advertisements and compare how the use of copy, imagery, typestyle, layout and audience is portrayed in the adverts. The used of picture in an advertisement is one of the most important thing on the page; this is because images draws more attention to the target audience and people can take in more information and remembrance from one glance of a picture than reading whole page of text. The colour has a major role in imagery; this is because it has connotations about the messages the advert is trying to portray. ...read more.

Where as the "Mitsubishi Outlander" uses objectives like "stunning" to reinforce the message that it is sophisticated and stylish. Overall I believe that the "Mitsubishi Outlander" is a lot more formal compared to the "Skoda Roomster"; because it talks to you in a formal manner. So due to this, the car will be aimed at mainly middle and upper class people. Where as the "Skoda Roomster" communicates to us in a song; suggesting that the car is affordable and suitable for families with children. As well as the use of picture and copy, type style also plays a big importance on an advert. Bold, large lettering and different colours may be used to create certain ideas or points stand out and to attract the reader's attention. Where as the use of capital letters can be used to emphasise particular words and make them seem important. However the type of font used can be part of the overall feel of the advertisement; for example: a formal, business-like handwriting such as "Times New Roman" connotes an advertisement to seem more personal or genuine. The "Skoda Roomster" types style it quite casual because the advert uses a bold "Arial" font which is not a professionally-like handwriting; however this font is eye-catching because of its boldness and the sharp white colour stands out well on a dark background. However the "Mitsubishi Outlander" uses bold capital letters to emphasise the words and make them seem as though the words the audience is reading is important. On the over hand there are other words on the advert, where the some copy is in lower case; the advertiser might have purposely done this because some copy may be more important to read than others. The "Mitsubishi Outlander" also uses a business-type of font "Verdana" compared to the "Skoda Roomster" and this once again connotes the advert to be more formal. In both adverts, the size of the font tends to vary. ...read more.

One of the debates is concerning mothers taking their children to school in these cars. If a child was to have an accident in the road with on of these vehicles, the chances are that the child will not survive. These cars also consume a lot of fuel so it is not echo friendly. Due to this, people may not be as reluctant to purchase the product and would affect the target audience. In conclusion, both pieces of media I have chosen are quite similar in their own ways; however they also have a few aspects where they are different. The main similarity between the two adverts is that they are both trying to sell the same product which is the vehicles. Another similarity which both "Skoda Roomster" and "Mitsubishi Outlander" share are, they are quite conventional adverts; this is because majority of the car adverts are dominated by a big image of their product as their centre picture. Even thought these cars are made for families with children, the target audience for these advertisements are completely different. The "Skoda Roomster" is a male driven car and this is shown in the image and anchor; whereas the "Mitsubishi Outlander" it made for women so they can feel safe with their children, because of the sturdiness of the vehicle. Overall all I prefer the "Mitsubishi Outlander" advert than the "Skoda Roomster's". This is because the advertisers have been clever, in the way they show the versatility of the vehicle in the setting; where as the "Skoda Roomster" was positioned in the green land. The "Mitsubishi Outlander" also presented the interior of the product in 4 series of pictures; which is eye-catching so the consumers knows what they are getting for their money. However the "Skoda Roomster" told us this in their copy. I also found the colours used in the advert were not as or eye-catchy or exciting as the "Mitsubishi Outlander's" however I do prefer the humours used in the anchor in the "Skoda Roomster" advert than the "Mitsubishi Outlander's". ?? ?? ?? ?? - 1 - ...read more.