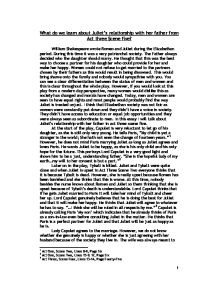 What do we learn about Juliet's relationship with her father from Act three Scene five? William Shakespeare wrote Romeo and Juliet during the Elizabethan period. During this time it was a very patriarchal society. The Father always decided who the daughter should marry. He thought that this was the best way to choose a partner for his daughter who could provide for her and make her happy. Women could not refuse to get married to the partners chosen by their fathers as this would result in being disowned. This would bring shame onto the family and nobody would sympathise with you. You can see a clear differentiation between the status of men and women and this is clear throughout the whole play. However, if you would look at this play from a modern day perspective, many women would dislike this as society has changed and morals have changed. Today, men and women are seen to have equal rights and most people would probably find the way Juliet is treated unjust. I think that Elizabethan society was not fair as women were constantly put down and they didn't have a voice in society. They didn't have access to education or equal job opportunities and they were always seen as subordinate to men. In this essay I will talk about Juliet's relationship with her father in act three scene five. ...read more.

As he goes on his language becomes much more violent and abusive. His anger builds up, as he was not prepared for this kind of reaction from his one and only daughter. Juliet pleads with her father. She shows fear and emotional breakdown. "Good father, I beseech you on my knees."6 This shows she is fearful and is scared of her father. She is not emotionally close enough to confide in her parents. She has a lack of self-esteem. This is a clear reflection of how society treats women. It is as if they have no choice in any matter and they have to accept whatever the male wants. He then goes on to remind Juliet about the effort he's made. "God's bread, it makes me mad! Day, night, work, play, Alone, in company, still my care hath been to have her matched."7 His love for her seems very conditional as he goes on. He calls her names and is prepared to disown her and this makes it seem as though he will only love her if she obeys him. However, Elizabethan society was patriarchal and fathers were always obeyed. Lord Capulet also does not know anything about Romeo so he can't understand why she won't get married to Paris. "Graze where you will, you shall not house with me...for by my soul, I'll ne'er acknowledge thee, nor what is mine shall never do you ...read more.