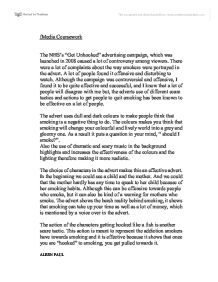 Media Coursework-The NHSs Get Unhooked advertising campaign, which was launched in 2008 caused a lot of controversy among viewers. There were a lot of complaints about the way smokers were portrayed in the advert.

fMedia Coursework The NHS's "Get Unhooked" advertising campaign, which was launched in 2008 caused a lot of controversy among viewers. There were a lot of complaints about the way smokers were portrayed in the advert. A lot of people found it offensive and disturbing to watch. Although the campaign was controversial and offensive, I found it to be quite effective and successful, and I know that a lot of people will disagree with me but, the adverts use of different scare tactics and actions to get people to quit smoking has been known to be effective on a lot of people. ...read more.

Also the use of dramatic and scary music in the background highlights and increases the effectiveness of the colours and the lighting therefore making it more realistic. The choice of characters in the advert makes this an effective advert. In the beginning we could see a child and the mother. And we could that the mother hardly has any time to speak to her child because of her smoking habits. Although this can be offensive towards people who smoke, but it can also be kind of a warning for mothers who smoke. ...read more.

The use of the slogan "Get Unhooked" is effective because it is quite catchy. It creates a strong message because the word "unhooked" suggests the smokers to get released from the addictive nicotine and come back from the grey, gloomy and numb world of smoking to the real one. To sum up, I think the overall message of the advert is quite loud and clear. It shows a smoker how bad smoking is and it tells them to quit it. And I think the advert has been quite effective in doing so, although the advert is quite disturbing and offensive but that's the harsh reality of smoking. ALEEN PAUL ...read more.