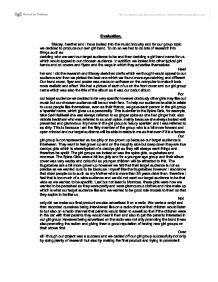 Evaluation. Stacey, heather and I have looked into the music industry and for our group topic we decided to produce our own girl band. To do so we had to do lots of research into things such as: deciding who we want our target audience to be and then deciding a girl band name for us which would appeal to our choosen audience. In addition we looked into other typical girl bands and cd covers and flyers and the ways in which they advertise themselves. Heather and I did the research and Stacey sketched drafts which we thought would appeal to our audience and then we picked the best one which we found more eye catching and different. Our band cover, flyer and poster was made on software on the computer to make it look more realistic and effect. ...read more.

My name in the girl group is 'saucy sparkle', and i was referred to as dirty. This is because I am the flirty member of the group who is a bit more forward and open minded and our target audience will be able to relate to me as that even if it is a facade. Our girl group is not represented as too girly or too grown up because our target audience is inbetween. They want to feel grown up and on the naughty side but deep down they are true daddys girls which is stereotypical of a daddys girl as they will always want things and therefore be spoilt. The girl groups we looked at was the spice girls, sugababes and monrose. ...read more.

Not only did we make our final product we also advertised it on a radio. We wrote a script and then recorded ourselves being interviewed like on a radio channel that children would listen to but also on a radio channel that parents would listen to aswell so that if the children were in the car with their parents they would hear it then and also to get the parents interested in our girl group. However being advertised on the radio was not only promoting the band it was also promoting the radion and giving them a good reputation of having new girl groups on their shows first. Overall I though our project was a success and we carried off our girl group successfully not only by doing plenty of research but also by making the final product and trying to promote it. ...read more.