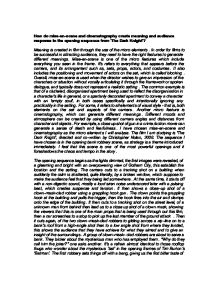 Opening Sequence of The dark Knight

How do mise-en-scene and cinematography create meaning and audience response in the opening sequence from 'The Dark Knight'? Meaning is created in film through the use of the micro elements. In order for films to be successful in attracting audience, they need to have the right features to generate different meanings. Mise-en-scene is one of the micro features which include everything you seen in the frame. It's refers to everything that appears before the camera, and its arrangement such as, sets, props, actors, and costumes. It also includes the positioning and movement of actors on the set, which is called blocking. Overall, mise-en-scene is used when the director wishes to give an impression of the characters or situation without vocally articulating it through the framework or spoken dialogue, and typically does not represent a realistic setting. The common example is that of a cluttered, disorganized apartment being used to reflect the disorganization in a character's life in general, or a spartanly decorated apartment to convey a character with an 'empty soul', in both cases specifically and intentionally ignoring any practicality in the setting. ...read more.

main props that is being used through out this film, then a car screeches to a stop to pick up the last member of the ground attack . Then it cuts again, of the two clown-mask-clad robbers to gliding across a zip-line on to a bank's roof from a high-angle shot then to a low angle shot from where they landed, this shows the audience that they have achieve for what they aimed and to give an insight of the surroundings. A group of clown-mask- clad robbers are about to seize a bank. They bicker about the mysterious man who has employed them. "Why do they call him the joker?" one asks another. It's a refrain almost identical to those rooftop thugs who wonder about the mysterious 'bat' in the opening frames of Tim Burton's 'Batman'. The first robbery sets things off with a bang, giving us the first bitter taste of just how sinister the Joker really is. Soon it leads us to tracking shot and we are inside the bank as a tense standoff is under way. ...read more.

His face filled the complete screen as the clip played, ' I believe whatever doesn't kill you simply makes you,' he said. He pauses on the last word: 'stranger'. As one employee gets a small bomb placed in his mouth. Nolan's dark star Ledger inhabits the clown prince of crime, embracing Joker's hard-R American accent, smeary make up, puppet-master body language, freakish facial tics and brilliantly perverted logic with a ferocity that electrifies in the scene. With his cracked white pancake make up, black-rimmed eyes, smeared lipstick and greasy, greenish-tinged hair, and prosthetic scars creating a ghastly grin on puffy cheeks. The Joker bears no resemblance to the strikingly handsome actor who played him. In fact, the character is like nothing we've seen or heard before. It's a performance as entertaining and memorable as anything we'll see all year. I would describe the Joker as a psychopathic, mass murdering, schizophrenic clown with zero empathy. I feel that The Joker look reflects his personality, - that 'he doesn't care about himself at all', he appears to be scruffier and grungier. The Dark Knight works so extraordinarily because of its stellar performance, as the Joker Ledger almost steals the show. He's satanic and psychotic with his permanent grin, fading, runny, makeup and scarred face. Ledger masterfully inhabits the character. ...read more.