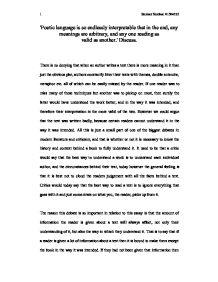 'Poetic language is so endlessly interpretable that in the end, any meanings are arbitrary, and any one reading as valid as another.' Discuss.

'Poetic language is so endlessly interpretable that in the end, any meanings are arbitrary, and any one reading as valid as another.' Discuss. There is no denying that when an author writes a text there is more meaning in it than just the obvious plot, authors constantly litter their texts with themes, double entendre, metaphor etc. all of which can be easily missed by the reader. If one reader was to miss many of these techniques but another was to pickup on most, then surely the latter would have understood the work better, and in the way it was intended, and therefore their interpretation is the more valid of the two. However we could argue that the text was written badly, because certain readers cannot understand it in the way it was intended. All this is just a small part of one of the biggest debates in modern literature and criticism, and that is whether or not it is necessary to know the history and context behind a book to fully understand it. It used to be that a critic would say that the best way to understand a work is to understand each individual author, and the circumstances behind their text, today however the general feeling is that it is best not to cloud the readers judgement with all the facts behind a text. Critics would today say that the best way to read a text is to ignore everything that goes with it and just concentrate on what you, the reader, picks up from it. ...read more.

Like every theory though there is always another side to the argument and this is where Stanley Fish's idea that each reader belongs to a 'community of readers' comes in. There is still the idea that the reader relates to the text with their personal experience, and I do not think that many people would dispute that idea, but what Fish says is that the personal side to it is much more generalised. It is more to do with your background and your education, someone from England would interpret a book differently than someone from Africa because their backgrounds are completely different. The third explanation that is given is Wolfgang Iser's view, which is the one I relate to the most. His theory is that the reader's imagination is what produces the interpretation. If there is a point in the text which is not fully explained then we, the reader, are left to work it out for ourselves, for example in King Lear when Cordillia tells her father that she loves him 'according' to her 'bond', the reader is left wondering why she did that and not just make something up to rival her sisters' answers; was it because she is stubborn or perhaps for moral reasons? The answer that the reader comes up with is their imagination filling in the gap. As Iser said the reader 'is drawn into the events and made to supply what is meant from what is not said' (Iser 1995, 24). This is particularly relevant when it comes to explaining interpretation because it is 'what is not said' in a text that gets the reader ...read more.

However, after exploring the topic I have found a few doubts. Although they come to expect it, is it really fair to take an authors text that they have probably been working on for a matter of years and completely change the meaning of it? Surely what they write is personal to them, not necessarily as an experience they have had but more that they have devoted so much time to their work to a standard that they see as perfection. They then introduce it to the public and a critic misinterprets it and gives it a bad review because they did not like their own translation of what was written. These doubts I have are not strong enough to change my mind, but they are there and should not be ignored. In closing I do believe that everybody is entitled to their own opinion, and literary criticism is exactly that, opinions. There is no way to write a text and ensure that every reader interprets it in the way it was intended. Authors are very interested to learn about different interpretations of their works and I think that it is this acceptance and acknowledgement from them that not proves but should persuade people that any interpretation of any work is a valid one. I will finish with a quote from an interpretation of Miller's The Critic as Host that sums up what I believe to be the answer to whether all interpretations are valid or not: 'The root of idea is the word for image. To imagine is to image. All figures are not what they figure. Univocality is impossible. Everything always means something else.'(Lye,http://www.brocku.ca/english). Word Count: 2710 1 Student Number: 01504325 ...read more.