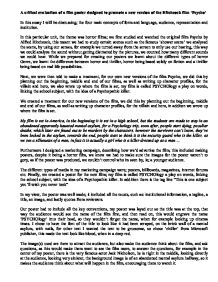 A critical evaluation of a film poster designed to promote a new version of the Hitchcock film 'Psycho' In this essay I will be discussing; the four main concepts of form and language, audience, representation and institution. In this particular unit, the theme was horror films; we first studied and watched the original film Psycho by Alfred Hitchcock, this meant we had to study certain scenes such as the famous 'shower scene' we analyzed the scene, by using our senses, for example we turned away from the screen to only use our hearing, this way we could analyze the sound without getting distracted by the pictures, we counted how many different sounds we could hear. While we prepared for creating our posters we learnt about the different types of horror Genre, we learnt the difference between horror and thriller, horror being based solely on fiction and a thriller being based on real life possibilities. Next, we were then told to make a treatment, for our own new versions of the film Psycho, we did this by planning out the beginning, middle and end of our films, as well as writing up character profiles, for the villain and hero, we also wrote up where the film is set, my film is called PSYCHOlogy a play on words, linking the school subject, with the idea of a Psychopathic killer. We created a treatment for our new versions of the film, we did this by planning out the beginning, middle and ...read more.

The producers and distributors are all my friends; however the actors in the information are all real, Jack Nicolson, Shia Le Bouf, Halle Berry all star. While due to censorship, my poster can't be too gory, the red and black colour scheme is a main component when signifying the genre of the film, Horror is often associated with red and black, red being blood, and black meaning darkness. In my view my poster is successful because; it uses all the key conventions needed for a good film poster, for example, comparing it with the original psycho poster, they both have taglines, and questioning images, Norman bates and Jack Nicholson for example both look very evil, there are also images of the co-stars a man and a woman. Despite this, my film is still given an '18' rating, sexual and violent images would not be allowed on my poster, because I wouldn't be able to control who views these posters, it could be 5 year old child viewing them for example. Alfred Hitchcock had a similar problem, in the 1960's it was not acceptable for a woman to be naked on film, and a lot of people protested over the sexual nature of the shower scene, were apparently the actresses' breasts were visible. The target audience for my film, would have to be 18+, as the film contains sexual and violent scenes, not suitable for younger viewers, their gender doesn't matter, because the film doesn't have typical boyish are girlish aspects, as with most horror films. ...read more.

I have made my film, in a way, that while it is surreal and at times super natural, there are still believable aspects. No, my film isn't a complete remake of the original psycho, but it is very much a sequel, but the audience isn't expected to realize until the end of the film, as I mentioned, the ghost of Norman bates has a big part to play, he is the father of 'Sam' played by Panettiere, and even though he is now dead like his own mother, he lives in the mind of his daughter, I decided to bring back the cross dressing aspect of psycho, the audience is lead to believe Norman Bates is in the mind of the security guard played by Nicholoson, but it is actually Panettiere who is the killer, dressing up as a man, (Norman Bates, her father) similar to the original psycho. To conclude; I believe I have produced a successful film poster, I have chosen images that are suitable for a younger audience, yet still scary, and questionable, I also believe I have thought out a very good marketing campaign, in this unit I have learned the difference between Horrors and Thrillers, Horrors being based on fiction and the super natural, while Thrillers being based on real life possibilities, I have also learnt about how to make a film more successful, wetting the audience appetite by hiding plots a prime example, in addition I've learnt how to use photo editing software like Photoshop, to help enhance my posters, and make them as realistic as possible. ...read more.