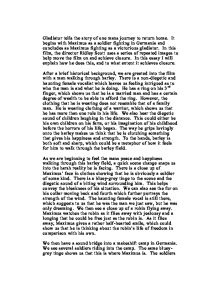 Gladiator tells the story of one mans journey to return home. It begins with Maximus as a soldier fighting in Germania and concludes as Maximus fighting as a victorious gladiator. In this film, the director Ridley Scott uses a series of repeated images to help move the film on and achieve closure. In this essay I will explain how he does this, and to what extent it achieves closure. After a brief historical background, we are greeted into the film with a man walking through barley. There is a non-diegetic and haunting female vocalist which leaves us feeling intrigued as to who the man is and what he is doing. He has a ring on his 3rd finger, which shows us that he is a married man and has a certain degree of wealth to be able to afford the ring. However, the clothing that he is wearing does not resemble that of a family man. He is wearing clothing of a warrior, which shows us that he has more than one role in his life. We also hear the diegetic sound of children laughing in the distance. This could either be his own children on his farm, or his imagination of his childhood before the horrors of his life began. The way he grips lovingly onto the barley makes us think that he is clutching something that gives his happiness and strength. To the hands, barley is both soft and sharp, which could be a metaphor of how it feels for him to walk through the barley field. ...read more.

The reply to his question is that he will see his song and wife in the afterlife. We then hear the diegetic sound of a sword being drawn and a sequence of fast moving, blue tinged shots. The first image we see is his path, and then it quickly moved onto his wife and song in the barley field. We then see very fast moving dark clouds with the wind blowing in the fields. This can show that time of hardship and bleakness is passing. We can see a flash of lightning and horses neighing. Maximus barely escapes death and begins his long journey home on his horse, despite the fact that he is badly injured. As he rides home, non-diegetic fast music helps to pick up the pace as he rushes home. He then has a premonition of his wife and son being killed. The real colours tell us that he is not dreaming and this is what is really happening. We hear his songs voice echo, which reminds us that he, is not there to save his family. The horses stride towards his son, and eventually knock him down and trample him. This is done in slow motion to make sure that the viewer realises what has just happened and to give it more impact. As Maximus approaches his farm we see smoke rising from a distance. The same music is played as the opening scene. ...read more.

Each time it is played we understand more and more of what he is doing and why he was there. It also conveys a lot about his personality and duties without having to give a lengthy introduction. This is because as we see the images throughout the film they are put more into context, and so by the end of the film we have pieced together his life. We can say that Ridley Scott has achieved closure. Closure means to bring something to an end, and conclude it. Repeating the images of both Maximus walking through a barley field and the gate in a brick wall help the viewer to move on with the story by casting their mind back to something they were confused about before watching the image again. In conclusion, using repeated images throughout the whole of the film means that there is little to be explained at the end of the film. This leaves room for a dramatic ending. From a viewers point of view this gives the film more depth and excitement, as they can concentrate on the final scene in which two of the main characters die. It also creates emotional impact, as the repeated scenes show just how much Maximus wants to go home. Ridley Scott used the technique of repeating images to give the view something to think about as they were watching it, but then be able to know exactly what the film is about from viewing the scenes over and over again. ...read more.