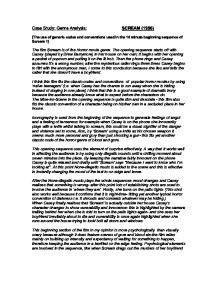 Case Study: Genre Analysis: SCREAM (1996) [The use of generic codes and conventions used in the 10 minute beginning sequence of Scream 1] The film Scream is of the Horror movie genre. The opening sequence starts off with Casey (played by Drew Barrymore) in her house on her own; it begins with her opening a packet of popcorn and putting it on the lit hob. Then the phone rings and Casey assumes it's a wrong number, after the mysterious caller rings three times Casey begins to flirt with the anonymous man, I come to this conclusion because she lies and tells the caller that she doesn't have a boyfriend. I think this film fits the classic codes and conventions of popular horror movies by using 'na�ve teenagers' (i.e. when Casey has the chance to run away when she is hiding instead of staying in one place) ...read more.

By keeping the narrative fairly innocent on the phone Casey is quite relaxed and chatty until 'Scream' says ''Because I want to know who I'm looking at''. At this point None-diegetic music is added to the scene and this is effective in instantly changing the mood of the text to on edge and tense. After the None-diegetic music plays the whole sequences mood changes and Casey realises that something is wrong- after this point lots of establishing shots are used to involve the audience in 'where they are'. Firstly, she turns on the patio lights (This shot also works well because it confirms that it is night-time- fitting yet another typical horror convention of darkness i.e. it shrouds and conceals whatever may be hiding.) When Casey finally realises that 'Scream' is actually outside her house Casey's character changes to show vunerability and innocence- this is highlighted by the camera trailing behind her when she is told to turn on the patio lights again- and she sees her ...read more.

Scream is dressed in a mask- this is effective and has been seen before in other films of this genre (i.e. the Hannibal films). Because it interests the audience to find out who/what the monster/person is, and it gives a good narrative to the film by adding 'the element of surprise'. It is also made aware to the audience that 'Scream' is not just a random psychopath who has decided to target Casey- I am made to think this because he knows about Casey's boyfriend and where she lives, her phone number etc. At the end section of this sequence when Casey has been stabbed she reaches up and lifts 'Screams' mask the text then switches to a reaction shot of Casey- informing the audience that Casey knew him. By using this effect of it being a planned attack it makes the audience want to continue watching the film because they now know that 'Scream' has a reason for these killings and it adds elements of malice and avengence. ...read more.