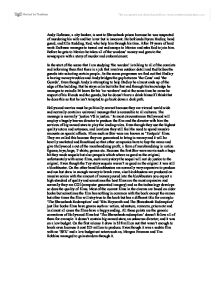 Shawshank. In the start of the scene that I am studying the warden is talking to all of the convicts and informing them that there is a job that involves outdoor detail and Red bribes the guards into selecting certain people.

Andy Dufresne, a city banker, is sent to Shawshank prison because he was suspected of murdering his wife and her lover but is innocent. He befriends Byron Hadley, head guard, and Ellis Redding, Red, who help him through his time. After 19 years of hard work Dufresne manages to tunnel out and escape to Mexico and asks Red to join him. Before he gets to Mexico he takes all of the wardens' money and goes to the newspapers with a story of murder and embezzlement. In the start of the scene that I am studying 'the warden' is talking to all of the convicts and informing them that there is a job that involves outdoor detail and Red bribes the guards into selecting certain people. As the scene progresses we find out that Hadley is having money troubles and Andy bridges the gap between 'the Cons' and 'the Guards'. Even though Andy is attempting to help Hadley he almost ends up of the edge of the building. But he stays calm but talks fast and through his knowledge he manages to swindle 36 beers for his 'co-workers' and at the same time he earns he ...read more.

Because the first Star wars movie such a huge hit they made sequels but also prequels which where as good as the original, unfortunately with some films, such as toy story the sequel will not do justice to the original. Even though the Toy story sequels weren't as good as the original it was still a blockbuster. On the other hand blockbusters are normally very expensive to produce and run but draw in enough money to break even, also blockbusters are produced on massive scales with the amount of money poured into the blockbusters you expect a high standard of quality and sometimes the best films are the most expensive and normally they are CGI (computer generated imagery) and as the technology develops so does the quality of films. Most of the current films in the cinema are based on older books but sometimes the film has nothing in common with the book except the names but other times the film will stay true to the book but has a different title for example: 'The Shawshank Redemption' and 'Rita Heyworth and The Shawshank Redemption' just like books films have genres such as: action, adventure, romcom, prison etc and in almost all cases the films have a happy ending. ...read more.

Because of Andy's' natural inquisitiveness he talks to Hadley about keeping all of the money and as Andy grabs Hadley's attention with that prospect the camera levels out showing that Andy and Hadley are almost equals and as Andy goes into even more detail the camera shows that he is in control but when Hadley talks it re-levels and this means that equality is present. The narrative structure in 'The Shawshank Redemption' is driven by the binary opposites and in this film they are made up by 'the cons' and 'the guards', good and evil and these differences create meaning, feeling and emotions and through them we gain understanding of the film and without them the story would have no direction. The whole theory of binary opposites driving a narrative forward was thought of by Levi-Strauss. The main binary opposites used in the film is shown when 'Tommy' is shot for threatening to tell the truth about the murders Andy was convicted for and he is killed for it. This is an opposite because a man that meant to be bad wants to do something good. On the other hand you have Hadley, a man that is meant to be good, killing 'Tommy' because he is told to. ...read more.