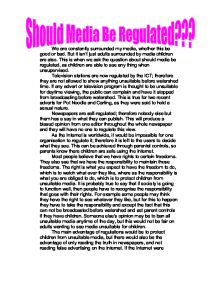 Should media be regulated?

We are constantly surrounded my media, whether this be good or bad. But it isn't just adults surrounded by media children are also. This is when we ask the question about should media be regulated, as children are able to see any thing when unsupervised. Television stations are now regulated by the ICT; therefore they are not allowed to show anything unsuitable before watershed time. If any advert or television program is thought to be unsuitable for daytime viewing, the public can complain and have it stopped from broadcasting before watershed. This is true for two recent adverts for Pot Noodle and Carling, as they were said to hold a sexual nature. ...read more.

If the Internet were regulated they would also be able to ensure the people accessing adult web sites really are over the age of eighteen. As well as loss of freedom another disadvantage of regulation is arguments it would cause. For example many companies would argue why their advert has been taken off air and another similar has not. This might result is there been hardly any television programs or adverts. In my opinion I think it would be impossible to regulate everything in media, therefore as long and unsuitable television programs are shown after watershed, it is the parent's responsibility to ensure their children do no watch them. It is also the parent's responsibility to set parent controls on their computer, to ensure their child doesn't see anything unsuitable. ...read more.