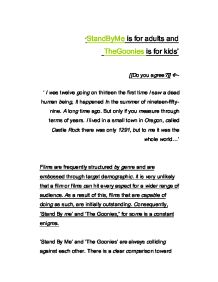 StandByMe is for adults and TheGoonies is for kids [[Do you agree?]]

'StandByMe is for adults and TheGoonies is for kids' [[Do you agree?]] <--- ' I was twelve going on thirteen the first time I saw a dead human being, It happened In the summer of nineteen-fifty-nine. A long time ago. But only if you measure through terms of years. I lived in a small town in Oregon, called Castle Rock there was only 1291, but to me it was the whole world...' Films are frequently structured by genre and are embossed through target demographic. It is very unlikely that a film or films can hit every aspect for a wider range of audience. As a result of this, films that are capable of doing as such, are initially outstanding. Consequently, 'Stand By me' and 'The Goonies," for some is a constant enigma. 'Stand By Me' and 'The Goonies' are always colliding against each other. There is a clear comparison toward each film. However, as films they both have their distinguished qualities. Meanwhile applauding the positive things that they both achieve, there are also aspects in which are liked and much to distaste upon. Undoubtedly they are the most astoundingly greatest films and rated at the top of two of the best 'coming of age' movies of a lifetime. Which is better? Is a subsequently difficult question to answer. All in all are they both specifically made for one type of agenda, viewer and audience? Or do they in actual fact have the best of both? ...read more.

Some would say "They are four obnoxious little brats! Why would I be interested in them", and carry on with vanity and what not. However, there are girls that are aroused by the film aside the fact that there is no female interest. Also, as so many age sequences can be satisfied with this film I think this film can be enjoyed by any age. There are numerous reasons why, so many opposing ages can adequately be equally delighted at this film. Elder people can watch this film and simply be abolished by nostalgia and refer to the four characters as their younger years, younger children can watch and be eager to grow up for the awaited adventure, and the adolescence audience can relish the years that they are able to live and relate to every single character on this movie. All this suggests that this film, may actually be a unified film concerning what type of viewers watch this film. Stand By Me was truly an amazing film. Overall, I thought that this film was incredible and I was properly drawn into the perplex characters of this film. The film was carefully proportioned out, with a mixture of drama, humour, coming of age, childish humour and some sad moments. I love the fact that this film is really just consisting the development of such well-established characters. ...read more.

and the jock who is the leaders elder brother. There are various teenager type scenes in the film, the well where the "cool boys" have a chat about their teenage lust for girls at the well and where Mikey gets a kiss. Not forgetting a well-found part of all teenage films the happy ending! All this suggests that perhaps this film may be for teenagers. In spite of the target audience the movie, can be watched by anyone of any age through all the walks of life. Wittingly, both films hit the audiences through their scenes, however, both in the act of nostalgia. However, in the Goonies it does it in a more infantile way. The villains in this film were hard to come to a serious minset, as a contrast to the villains in Stand by me where the characters are much more believable. Stand By Me and The Goonies, both are magnificent films of 80's period. Predominantly, in actual fact The Goonies has been purposely made for kids, however elder generations still love to watch it as remembrance of what they enjoyed watching during their childhood. However, when viewers watch Stand By Me they get nostalgic and are reminded of their life when they were young and being at the brink of adolescence, as a pose to what the whacky shows they enjoyed to watch when they were young. Moreover, the way each film attracts the audience outweighs the concerns of what age group you should categorise each film by. ...read more.