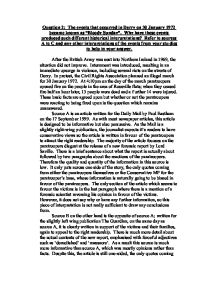 The events that occurred in Derry on 30 January 1972 became known as &quot;Bloody Sunday&quot;.

Question 2: The events that occurred in Derry on 30 January 1972 became known as "Bloody Sunday". Why have these events produced such different historical interpretations? Refer to sources A to C and any other interpretations of the events from your studies to help in your answer. After the British Army was sent into Northern Ireland in 1969, the situation did not improve. Internment was introduced, resulting in an immediate upsurge in violence, including several riots on the streets of Derry. In protest, the Civil Rights Association planned an illegal march for 30 January 1972. At 4:10pm on the day of the march paratroopers opened fire on the people in the area of Rossville flats; when they ceased fire half an hour later, 13 people were dead and a further 14 were injured. ...read more.

Therefore the quality and quantity of the information in this source is low. It only puts across one side of the story, the only quotes coming from either the paratroopers themselves or the Conservative MP for the paratrooper's base, whose information is naturally going to be biased in favour of the paratroopers. The only section of the article which seems to favour the victims is in the last paragraph where there is a mention of a forensic scientist reversing his opinion in favour of the victims. However, it does not say why or have any further information, so this piece of interpretation is not really sufficient to draw any conclusions from. Source B on the other hand is the opposite of source A; written for the slightly left wing publication The Guardian, on the same day as source A, it is clearly written in support of the victims and their families, again to appeal to the right readership. ...read more.

It is also produced more than a year after the first two sources, so media attention will have died down making it unnecessary for the broadcast to be long and detailed. As a result the broadcast is simply a brief summary of events with limited detail and a quote from the first witness of the Saville Inquiry. I also looked at the drama-documentary, 'Sunday' by Jimmy McGovern as an alternative source. While it claimed to be completely based on fact, a large amount of 'artistic licence' has clearly been employed by McGovern to make the programme very biased against the paratroopers. They are portrayed as cold blooded killers who simply start shooting rather than responding to enemy fire, and there is a lot of focus on the sorrow of the victims families. This is clearly done to make it a good TV programme, but unfortunately makes it quite a limited source in terms of reliability. ...read more.