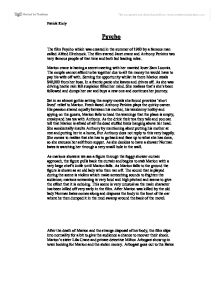 The film Psycho which was created in the summer of 1960 by a famous man called Alfred Hitchcock.

Psycho The film Psycho which was created in the summer of 1960 by a famous man called Alfred Hitchcock. The film starred Janet crane and Anthony Perkins two very famous people of that time and both led leading roles. Marion crane is having a secret meeting with her married lover Sam Loomis. The couple cannot afford to be together due to all the money he would have to pay his wife off with. Serving the opportunity whilst its there Marion steals $40,000 from her boss. In a frantic panic she leaves and drives off. As she was driving hectic rain fell suspicion filled her mind. She realises that's she's been followed and dumps her car and buys a new one and continues her journey. Set in an almost gothic setting the empty motels she found provides 'short lived' relief to Marion. Fresh faced Anthony Perkins plays the quirky owner. ...read more.

The sound that is played during the scene is violins which make screeching sounds to frighten the audience; marions screaming is very loud and high pitched and seems to give the effect that it is echoing. This scene is very unusual as the main character has been killed off very early in the film. After Marion was killed by the old lady Norman bates comes along and disposes the body in the boot of the car where he then dumped it in the mud swamp around the back of the motel. After the death of Marion and the strange disposal of her body, the film slips into normality for a bit to give the audience a chance to recover their shock. Marion's sister Lila Crane and private detective Milton Arbogast show up in town looking for Marion and the stolen money. Arbogast goes out to the Bates Motel to try to trace Marion and runs into of Norman. ...read more.

Lila is scared by the desiccated corpse that she finds and is terrified when the killer shows up in the doorway and the film wraps up very quickly. The notable thing about this scene is the way that Hitchcock used light and shadow in this scene with the expertise of the best black and white film directors. The swinging light bulb gives the scene a surreal quality, even making the mummy seem to blink. Like the killing of Arbogast and the shower sequence, this scene is brief, but seems much longer. As the film comes to an end Norman bates is arrested as his hidden identity is revealed. Norman bates was a transvestite and was taken to the police station where he was questioned. Being a transvestite in America in the 1960 was very unusual and was not often heard of so people found the ending of the film amazing and it led them to tell others about the film, this is what made the film psycho a very famous film and made Alfred Hitchcock a very rich man. ?? ?? ?? ?? Patrick Kiely ...read more.