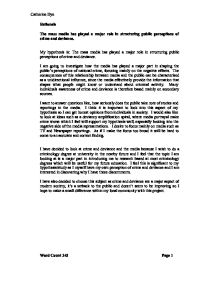 The mass media has played a major role in structuring public perceptions of crime and deviance. Discuss

Rationale The mass media has played a major role in structuring public perceptions of crime and deviance. My hypothesis is: The mass media has played a major role in structuring public perceptions of crime and deviance. I am going to investigate how the media has played a major part in shaping the public's perceptions of national crime, focusing mainly on the negative effects. The consequences of this relationship between media and the public can be characterised as a unidirectional influence, since the media effectively provide the information that shapes what people might know or understand about criminal activity. Many individuals awareness of crime and deviance is therefore based mainly on secondary sources. I want to answer questions like, how seriously does the public take note of stories and reportings in the media. I think it is important to look into this aspect of my hypothesis so I can get honest opinions from individuals in society. I would also like to look at ideas such as a deviancy amplification spiral, where media portrayal make crime worse which I feel will support my hypothesis well, especially looking into the negative side of the media representations. I desire to focus mainly on media such as TV and Newspaper reportings. As if I make the focus too broad it will be hard to come to an accurate and correct finding. I have decided to look at crime and deviance and the media because I wish to do a criminology degree at university in the nearby future and I feel that the topic I am looking at is a major part in introducing me to research based at most criminology degrees which will be useful for my future education. I feel this is significant to my hypothesis/study as I myself have my own perception of crime and deviance and I am interested in discovering why I have these discernments. ...read more.

do the questionnaire, I had to pick another twelve random people from my list, and I had to be careful not to be bias so it was definitely random selecting from the list. I.e. I was not picking out names that I wanted. I split my hypothesis into four objectives that I thought related well to my hypothesis these were: Page 13 Whether most people perception of crime stems from Media, The media are not truthful in their reporting, Desensitation in the media and the media helps to create a deviancy amplification spiral within society. I concluded from my research that my aims and objectives were correct. Overall most whom did the questionnaire agreed that the media does have a negative effect of crime, sort of like bad advertising for it and they only pick out the really bad crime to 'shock' people as overtime more are being desensitised by the media that it takes a lot to surprise them. And that the media can have a negative effect on crime in the sense that it is making the crime worse, as supported by Cohen. If I was going to go into further research I would suggest to myself to improve my questionnaire and I think that I would do unstructured interviews. I would try to broaden out to get opinions from many different types of people including journalists who write the stories and news readers whom report them. I would also look at more sociological background which would support my objectives well. Word Count 763 Page 14 Appendix B Diary November 28th * Finished last two questions on questionnaire * Picked out 50 random names from list * Handed out 7 copies of the questionnaire, no problems so far with participation, everyone seemed fine with answering the questionnaire. * One participant asked me a question about one of the questions, managed to put her on the right path and I think she got the idea. Page 15 ?? ?? ?? ?? Catherine Dye ...read more.