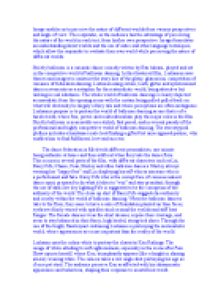 ﻿Image enables us to perceive the nature of different worlds from various perspectives and angle of view. The responder, as the audience has the advantage of perceiving the nature of the world in each text, from his/her own perspective. Image formulates an understanding about worlds and the use of satire and other language techniques, which allow the responder to evaluate their own world while perceiving the nature of different worlds. Strictly ballroom is a romantic dance comedy written by Baz luhram, played and set in the competitive world of ballroom dancing. In this theatrical film, Lurhaman uses themes and images to construct the story line of the glitzy, glamorous, competition of romance of federation dancing. Lurhman using colour, teeth, glitter and synchronised dance movements as a metaphor for the materialistic world, being attractive but lacking in real substance. The whole world of ballroom dancing is clearly depicted as unrealistic from the opening scene with the curtain being pulled pulled back on what will obviously be largely a fairy tale and where perceptions are often ambiguous. ...read more.

When the ballroom dancers take to the floor, they seem to have a cake of foundation planted on their faces, eyebrows finely waxed with sparkles stuck around the eyelids and stiff bent fringes. The female dancers wear the short dresses, expose their cleavage, and seem to stay balanced in their fancy, high healed, string tied shoes. Through the use of the bright, flamboyant costuming Lurhamn is portraying the materialistic world, where appearances are more important than the reality of the world. Lurhamn uses the colour white to portray the character Ken Railings. The image of white alluding to self-righteousness, especially in the scene after Pam Shaw injures herself, where Ken, triumphantly appears (like a knight in shining amour) wearing white. The camera takes a low angle shot portraying his ego as if on a pet stool. The audience perceive Ken as affected with his idiosyncratic appearance and behaviour, shaping their response to an artificial world. Cultural themes throughout the film are displayed mainly though Fran and her ethnic background. Fran?s family continue to live in their cultural Spanish tradition, of musical, celebrations, dance and passion. The backyard scene is an example of the Spanish tradition. ...read more.

This extends to the viewer an appreciation of the level of skill required top participate in ballroom dancing Another major theme is Scott?s desire to perform freestyle dance steps. The Camera movement contributes to this underlying theme by also performing in a freestyle manner. This is evident in the scene immediately following Scott and Tina?s gets boxed in. As Scott breaks through the barrier created by Ken and partner, he launches into a freestyle routine. The camera immediately begins behaving in a similar fashion. It moves around the room freely and spontaneously, capturing long, continuous shots of Scott. This reinforces the sense in the viewer that neither Scott nor the camera is following any set plan or steps. Throughout the film we learn ballroom dancing is about wanting success and power at no matter what cost including corruption, this is portrayed when Ken is seen to be making a deal with Barry Fife to win and not let Scott win. Image holds the story line together for the viewer. Lurham displays image though different characters playing different roles, different cultures, personalties, values and vies on the different dance steps. Although dancing is not just going through the steps, but felt through the heart and moved through the rhythm. ...read more.