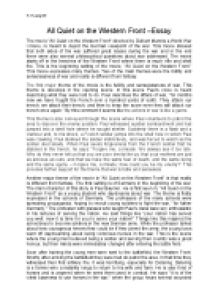 Themes in the movie &quot;All Quiet on the Western Front&quot; directed by Delbert Mannis

﻿H. Huang 4E All Quiet on the Western Front ?Essay The movie "All Quiet on the Western Front" directed by Delbert Mannis a World War I movie, is meant to depict the German viewpoint of the war. This movie showed that both sides of the war suffered great losses during the war and in the end there were also several philosophical questions about war addressed. The movie starts off in the trenches of the Western Front where there is much rifle and shell fire. This is the beginning setting of the movie, "All Quiet on the Western Front." This movie expresses many themes. Two of the main themes were the futility and senselessness of war and reality is different from fantasy. The first major theme of the movie is the futility and senselessness of war. This theme is develops in the opening scene. In this scene Paul?s voice is heard describing what they were told to do. ...read more.

Why do they never tell us that you are poor devils like us, that your mothers are just as anxious as ours, and that we have the same fear of death, and the same dying and the same agony ? Forgive me, comrade; how could you be my enemy?? This provides further support for the theme that war is futile and senseless. Another major theme of the movie in "All Quiet on the Western Front" is that reality is different from fantasy. The first setting is of Germany in the beginning of the war. The main character of this story is Paul Baumer. He is first seen in, "All Quiet on the Western Front" as a young student who daydreams about war. The theme is firstly expressed in the schools of Germany. The professors of the many schools were spreading propaganda, hoping to recruit young soldiers to fight the war, "for father Germany." ...read more.

He says "It is of the vilest baseness to use horses in the war," when the group hears several wounded horses writhe and scream for a long time before dying during a bombardment. Already it was not as their professor had expressed in his lectures in their time in the classroom. The young men had found out soon enough that living conditions were hard and that food was scarce. This conveys the theme; reality is different to fantasy The movie ?All Quiet on the Western Front? had two major themes. The themes; futility and senselessness of war, and reality is different from fantasy. These themes from this movie were expressed in specific scenes; the opening scene, when Paul patrols the area, the school scene and the scene where the young men enter the battlefield. It is saddening to see that two sides have to constantly fight each other when all they want is peace and the propaganda making the young men believe in such stories as becoming victorious heroes and serving their country was a great honour. ...read more.