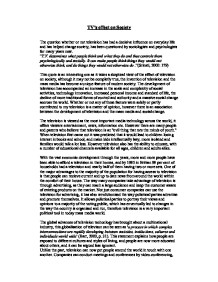 TV's effect on Society The question whether or not television has had a decisive influence on everyday life and has helped change society, has been questioned by sociologists and psychologists for many years now. "T.V. determines what people think and what they do and thus controls them psychologically and socially. It can make people think things they would not otherwise think, and do things they would not otherwise do."(Srinati, 2000: 179) This quote is an interesting one as it takes a skeptical view of the effect of television on society, although it may not be completly true, the invention of television and the mass media has become a unique feature of modern society. The development of television has accompanied an increase in the scale and complexity of social activities, technology innovation, increased personal income and standard of life, the decline of more traditional forms of control and authority and a massive social change accross the world. ...read more.

It allows polictical parties to portray their views and opinions to a majority of the voting public, which has enventually led to changes in the way the country is organised and run, therefore television is a very important political tool in today mass media world. The global advances of television techonlogy has brought about a multinational industry, this globalisation of televison can be seen as 'a process in which complex interconnections are rapidly developing between societies, institutions, cultures and individuals world wide' (Barr, 2000, p. 31). This statement explains how people are exposed to different cultures and styles of living, and people are now more educated about others, and it can be argued less ignorant. Unlike the past, television can now put people around the world in touch with one another. Companies can conduct meetings and conferences by video-conferencing, therefore saving time and promoting productivity. It enables information to be disseminated at a faster pace to a large population. ...read more.

For example in Britain today Television plays a distinctive role in the social and cultural life of contemporary Britain. It is a forum where the nation speaks for itself, where the different cultures and groups that make up our society can see themselves represented and from which majority obtain information that they require as citizens of this country. "Television brings together cultural groups and raises a level of group consciousness through a distinctive use of language and cultural symbolism" (Ball-Roreach & Cantor, 1986, p. 38). All these things would not have been possible without the invention of television. It is through television medium where a wide range of cultural activities can reach people in their homes. If television was not invented then some social and cultural events might not have occurred, therefore television can be seen as a medium in demonstrating social and cultural significance in today's society. Overall I believe that television is seen by a majority of the viewing public as a good source of education, entertainment and conversation, which has helped the world become more tolerant, respectful and knowledgeable. ...read more.