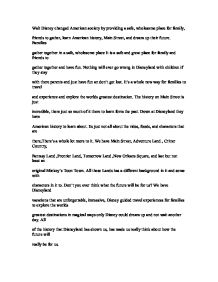 What did Walt Disney do for America?

gather together in a safe, wholesome place It is a safe and great place for family and friends to

gather together and have fun. Nothing will ever go wrong in Disneyland with children if they stay

with there parents and just have fun an don’t get lost. It’s a whole new way for families to travel

and experience and explore the worlds greatest destination. The history on Main Street is just

incredible, there just so much of it there to learn form the past. Down at Disneyland they have

American history to learn about. Its just not all about the rides, foods, and characters that are

there,There’s a whole lot more to it. We have Main Street, Adventure Land , Critter Country,

original Mickey’s Toon Town. All these Lands has a different background in it and some with

characters in it to. Don’t you ever think what the future will be for us? We have Disneyland

vacations that are unforgettable, immesive, Disney guided travel experiences for families to explore the worlds

greatest destinations in magical ways only Disney could dream up and not wait another day. All

of the history that Disneyland has shown us, has made us really think about how the future will

really be for us.

Families like to gather together and be safe with one another. Disneyland is in a safe

is Anaheim. It is 160 acres orange near the Santa Ana Freeway Interstate 5, which is where the


land Disneyland was built on. The size of it would be 85 acres of grand. The guest parking for

10,250 vehicles. The how they are open are 365 days a year and they offer extended operating

hours during holiday periods and summer months. The costumizing inventory is 500,000 pieces.

From initial design to public view, a new costome takes form eight to 12 months to produce. The

fabric. It makes it safe but having the employees making sure that there are not any fights of gag

related in the theme park. Witch all makes this a safe place to hangout without any harm. The

decorations and landscaping of the theme park is just beautiful. This makes people feel like there

in a very neat, and clean well area. More than 5,000 gallons of paint are used each year to give a

better -than a new look. There are almost 20 million gallons of water in the ten bodies of water

found in Disneyland. The landscaping are more than 100 species of plants from over 400 nations

are represented in Disneyland. The rules and dress code is very strict on the employees. In order

to geta job at Disneyland u must me well mannered, dress an of course always happy around the

people. There are between five and six hundred arts, crafts professions and skill contributed by

Disneyland employees during operation. The security they have there is just huge. Cameras

everywhere you can possibly think of, an you also have undercover people just walking around

the park to make sure that no one is tagging or destroying the place. They have security watching

the front an back of the park. The people that work at Disneyland are very helpful and nice. The

yourself there an will help you with anything you need. Toon Town a place for kids to enjoy

themselves. Another little part of the park separated from it but in a different area. Toon Town is a three dimensional cartoon world, home town to Mickey Mouse and his friends. It is a smaller

and separate part of Disneyland where you can go and visit.

U.S.A. is a composite of small town America, circa 1990. There are many more than 100,000 light bulbs used, including 11,000 “rim lights” used to outline the buildings in Main Street U.S.A. Frontier land has the Big Thunder Mountain Rail Road ride, Fantasmic, Mark Twain Steam Boat, Golden horseshoe Range, Tom Sawyer Sailboat/Rafts to Tow Sawyer Island. We Follow the strums of the banjo music and the smell of the smoked turkey legs and it will lead you to the old-time wild west of Frontierland. The crash of the cascading water of Splash Mountain and the screams of the guests in the runaway trains of Big Thunder Mountain Railroad will entice you to see more of America's pioneer homeland. Cross the Rivers of America to explore Tom Sawyer's Island or relax in the air-conditioned theatre to see the old-fashioned hoedown fun of the Country Bear Jamboree. An exciting realism of pioneer and a return to the Old West.

Fantasy Land, The Happiest Kingdom of Them All," Fantasyland brings to life the wonder and magic of Disney animated stories and characters in a quaint storybook village. Guests can embark on adventures with Snow White, Peter Pan, Mr. Toad, Pinocchio and Alice in Wonderland, soar through the air with Dumbo, set sail on a joyous salute to children of the world and race down the icy slopes of an Alpine mountain.

Critter Country, This is the land that the small animals from the Disney film Song of the South, known as "critters," have made their own. Throughout the area, you can see the critters' burrows and little homes, especially along the banks of the Rivers of America and on the slopes of Splash Mountain. A down-home back woods setting for splash mountains and the country bear play house.Critter Country is a land unique to Disneyland.

There's no version of this in the Magic Kingdom. It's a little area of Disneyland devoted to cartoon wildlife. So it's not Disney's Animal Kingdom by any sense of the imagination. Just think of it as a place where mischievous rabbits can play and a hug from a bear is just around the corner. Disneyland's Critter Country will always be part of my memories for something I'll never forget.

are simply of attractions of old, for there have been more retired attractions in this land than in any other. I love to visit Tomorrowland early in the morning and then again late at night. Many times in the evening, a band will rise up from below at the Tomorrowland Terrace filling the air with music and a light atmosphere.

In conclusion, Disneyland is the greatest place on earth especially for the little young

children. Its every child’s dream to go an see Mickey. Even the athletes go after they win a world

children, young adults an adults love going there to spend quality time with there family.