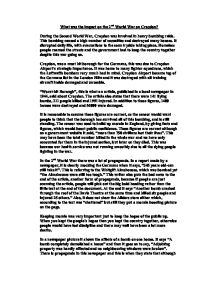 What was the impact on the 2nd World War on Croydon?

What was the impact on the 2nd World War on Croydon? During the Second World War, Croydon was involved in heavy bombing raids. This bombing caused a high number of casualties and destroyed many houses. It disrupted daily life, with evacuations to the countryside taking place. Homeless people roamed the streets and the government had to keep the country together despite this war going on. Croydon, was a must hit borough for the Germans, this was due to Croydon Airport's strategic importance. It was home to many fighter squadrons, which the Luftwaffe bombers very much had in mind. Croydon Airport became top of the Germans list in the London Blitz and it was destroyed with all training aircraft inside damaged and unusable. "Worst-hit Borough", this is what an article, published in a local newspaper in 1944, said about Croydon. The article also states that there were 141 flying bombs, 211 people killed and 1991 injured. In addition to these figures, 1400 houses were destroyed and 54000 were damaged. ...read more.

Also, it does not show the Allders store either which, according to the text was "shattered" but still they put a morale boosting picture on the page. Keeping morale was very important just to keep the hopes of the public up. When you kept the people's hopes then you kept the country together, otherwise people would have lost discipline and there may well have been a lot more deaths. In a newspaper picture it shows the affects of a bomb on one house. It says "A bomb completely demolished a house" and then it goes on to say, "Adjoining property was hardly affected and no neighbouring windows were broken". There is propaganda in this newspaper and this is when they state that although one house has been destroyed, the other houses have been "untouched" and this comment on its own, lets the public know that no other damage has been done to the area, making them feel a little more safe. ...read more.

It may feel that the people have the right to know what is really going on in their area. To help with these attacks, the government (Commercial ARP (Air Raid Patrol) Service) done its bit by handing out leaflets, with information to follow when there is an air raid. It tried everything to cut down on civilian casualties. The instructions were strict and every civilian was given a gas mask. On 20th September 1940 homeless people were given advice and the government said, "Opportunities are still open in an evacuation area". There are many things which you could have done, if you were homeless, to get over this problem, according to the report. These reports are official and this means that they are absolutely reliable. We do not know whether these duties were carried out in an efficient way because it doesn't tell us what happened after the advice was given to these people. ...read more.