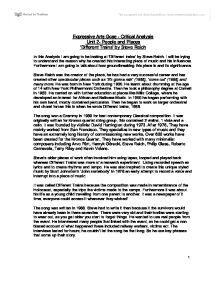 Expressive Arts Gcse - Critical Analysis Unit 2- People and Places 'Different Trains' by Steve Reich In this Analysis I am going to be looking at 'Different trains' by Steve Reich. I will be trying to understand the reason why he created this interesting piece of music and his influences. Furthermore I am going to talk about how groundbreaking this piece is and its significance. Steve Reich was the creator of the piece, he has had a very successful career and has created other spectacular pieces such as 'It's gonna rain' (1965), 'come out' (1995) and many more. He was born in New York during 1936. He learnt about drumming at the age of 14 with New York Philharmonic Orchestra. Then he took a philosophy degree at Cornell in 1953. He carried on with further education at places like Mills Collage, where he developed an interest for African and Balinese Music. In 1966 he began performing with his own band, mostly contained percussion. Then he began to work on larger orchestral and choral forces this is when he wrote Different trains, 1988. The song won a Grammy in 1989 for best contemporary Classical composition. It was originally written for Kronos quartet string group, this contained 2 violins, 1 viola and a cello. It was founded by violinist David Harrington during 1973. After 1978, They have mainly worked from San Francisco. ...read more.

He was very lucky, because if he lived a few thousands miles away it would be a very different story, this song shows the comparison between the two train journeys going on at the same train. The Second movement was not as happy as the first; it conveyed the horror of the Holocaust throughout Europe. It was played in E minor a common key for sad emotional meaningful songs, like the saints of coming. In stead of using more cheerful noises such as the Train whistles, they used Sirens, which are scary and create a frightening atmosphere. This noise makes you think of danger and fear, which is exactly what the Holocaust was. The words come a lot quicker and the tempo is slower. The instruments are played more confidently and violently. This creates a more up tense atmosphere to the audience. The second movement is a lot more action packed and louder, more violent he creates these feelings by using different rhythms, tempos, volume and dynamics. Here are some examples of the lyrics from movement 2, they are form a holocaust survivor . * On my Birthday * Germans walked in * She said quick go * Into those cattle wagons * 4 days and nights * They shaved us * They tattooed a number in our arm * Flames going up into the sky At the beginning of this year we learnt about the holocaust in Religious education and the awful things the victims went through. ...read more.

He used a minimal amount of pitches; instead they just used the same clap, microphone or line of lyrics to create the song. Overall this song is groundbreaking for several reasons because it was a record of what happened. We can hear real survivors voice and phrases which act as lyrics to convey what happened. These words and rhythms of the songs put together a story in your head. Secondly it sent music into a new digital age and thirdly it was a successful example and was the start of greater songs to come. He showed people what could be achieved, encouraged them to try out with this technique. He set all musical people into a new age, digital music. The idea of splitting the song into 3 different motifs worked really well because it enabled the audience to realise, the 3 motifs meanings were very different and it defined a line between the sections. In section 1, its a lot smoother and nicer noises such as the train whistle, whereas section 2 is more rough and uses more horrific terror, sirens create a dangerous atmosphere. It makes you think there's something wrong and then the lyric phrases convey this further. He wanted to show his true compassion and notification of his train journeys and how living in a different place, even if you're the same race, colour or religion can make such a huge impact on your life. ?? ?? ?? ?? 1 ...read more.