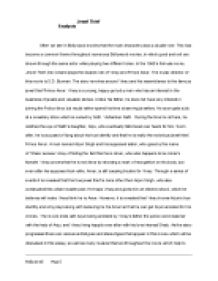 Jewel Thief is a good example of a Bollywood formula film containing a variety of musical elements.

﻿Jewel Thief Analysis MUSI 1500: Section B Often we see in Bollywood movies that the main character plays a double role. This has become a common theme throughout numerous Bollywood movies, in which good and evil are shown through the same actor while playing two different roles. In the 1960?s formula movie, Jewel Thief, Dev Anand plays the double role of Vinay and Prince Amar. The music director of this movie is S.D. Burman. The story revolves around Vinay and his resemblance to the famous jewel thief Prince Amar. Vinay is a young, happy-go lucky man who has an interest in the business of jewels and valuable stones. Unlike his father, he does not have any interest in joining the Police force but would rather spend his time observing jewellery. He soon gets a job at a Jewellery store which is owned by Seth. Vishamber Nath. During the time he is there, he catches the eye of Nath?s daughter, Anju, who eventually falls head over heels for him. ...read more.

Another archetype is the villain, Arjun Singh, who is played by Ashok Kumar. Unlike the average villain, Kumar does not have a mustache or a scary appearance. Kumar does not appear to be the villain at the beginning of this movie, however as time progresses the audience learns that he is in fact the mastermind jewel thief. Other various archetypes include the despotic father, the vamp and the ?purely virginal? heroine. The stereotype heroine, who is usually loved by all and portrays the epitome of goodness, does not fit the character of the heroine in this movie. Shalu or ?Shalini? is a part of the plan created by Singh and pretends to be his sister. However, she does not want to play a part in his plan anymore because she falls in love with Vinay, and in the end she escapes Singh?s control and reverts to the ?good? side. The music of this movie can be categorized into various types. The opening scene of the movie contains a background score that is usually associated with crimes or criminal activity, indicating some kind of criminal presence throughout the movie. ...read more.

There is an instrumental outro, in which the flute can be heard. The last song that will be discussed ?Raat Akeli Hai? which means ?The night is lonely? is sung by Asha Bhonsle. This song can be categorized into a romantic/seductive song in which, Anju seduces Vinay. In the beginning of the song, Anju says she is going to call her father out to meet with Vinay but in reality switches off the lights and starts to sing. The mukhda occurs three times, the antara two times and the interlude two times as well. The interlude includes many instruments such as the saxophone, flute and guitar. This movie explores many themes such as romance, betrayal, and crime. Overall, Jewel Thief can be called a ?formula? movie because it contains all the crucial elements of a Bollywood movie. There is action, comedy, romance which is what contributes to its success. The music director, S.D. Burman, mixed up different styles of songs in order to create the mood for specific scenes in the movie to progress the story onwards. In conclusion, Jewel Thief is a good example of a Bollywood formula film containing a variety of musical elements. ________________ Rida Javed Page ...read more.