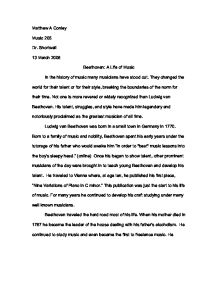 Matthew A Conley Music 205 Dr. Shortwell 13 March 2006 Beethoven: A Life of Music In the history of music many musicians have stood out. They changed the world for their talent or for their style, breaking the boundaries of the norm for their time. Not one is more revered or widely recognized than Ludwig van Beethoven. His talent, struggles, and style have made him legendary and notoriously proclaimed as the greatest musician of all time. Ludwig van Beethoven was born in a small town in Germany in 1770. Born to a family of music and nobility, Beethoven spent his early years under the tutorage of his father who would awake him "in order to "beat" music lessons into the boy's sleepy head." ...read more.

Beethoven traveled the hard road most of his life. When his mother died in 1787 he became the leader of the house dealing with his father's alcoholism. He continued to study music and even became the first to freelance music. He became a favorite of the royals and patrons. It financed him an apartment and created enemies among other piano players in the area. In 1802 he began to deal with the most haunting tragedy of his life. Beethoven was losing his hearing. He struggled with thoughts of suicide but "his stubborn nature strengthened him and he came to terms with his deafness in a dynamic, constructive way." ...read more.

Surely, all the music reflected all of his tragedies. The Ninth Symphony was completed in 1824. This piece broke the traditional music barrier. "The text for the last movement of the Ninth Symphony is a poem by the greatest German poet Schillers: the Ode to Joy" (200, Yukin). Beethoven conducted the Ninth Symphony. Beethoven continued conducting even after the piece was at an end, the audience applauded, until a singer turned Beethoven around. Beethoven got a glimpse of cheers. The image is deeply moving to many. Beethoven died March 26, 1827 at the age of 56. Through many adversities, Beethoven became one the greatest composers. Beethoven broke the barrier for classical symphonies. He was well know for his dramatic styles. Beethoven produced three different main periods in his life. Each on bringing a different life experience and tragedy. Beethoven was truly gifted and talented. ...read more.