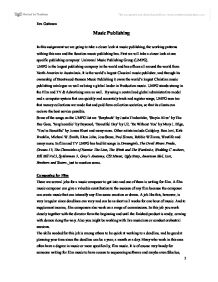 Music Publishing In this assignment we are going to take a closer look at music publishing, the working patterns withing this area and the function music publishing has. First we will take a closer look at one specific publishing company: Universal Music Publishing Group (UMPG). UMPG is the largest publishing company in the world and has offices all around the world from North America to Australasia. It is the world's largest Classical music publisher, and through its ownership of Brentwood-Benson Music Publishing it owns the world's largest Christian music publishing catalogue as well as being a global leader in Production music. UMPG stands strong in the Film and TV & Advertising area as well. By using a centralized global administrative model and a computer system that can quickly and accurately track and register songs, UMPG sees too that money collections are made fast and paid from collection societies, so that its clients can recieve the best service possible. Some of the songs on the UMPG list are 'Sexyback' by Justin Timberlake, 'Stayin Alive' by The Bee Gees, 'Irreplaceable' by Beyonc�, 'Beautiful Day' by U2, 'Be Without You' by Mary J. Blige, 'You're Beautiful' by James Blunt and many more. Other artists include Coldplay, Bon Jovi, Kirk Franklin, Micheal W. Smith, Elton John, Joss Stone, Paul Simon, Robbie Williams, Westlife and many more. In film and TV UMPG has had hit songs in Dreamgirls, The Devil Wears Prada, Oceans 13, The Chronicles of Narnia: The Lion, The ...read more.

call it that, for instance if you were doing music for a film, you would have to fit the music at the right moment and shape it, which makes it more challenging, since the work that the composer does becomes both visual and audio. For a beginner, maybe someone who is a good songwriter who needs to get his name out and show his work, it can be a great opportunity to get your music in an advert on television or radio. Also it can improve your writing abilities, if you for instance get a publishing deal, it can help you get in contact with other songwriters, producers, important people that play a key role for your networking. Also if you want to get a record deal, you want to become an artist or want to write for the big films, it's great to start in this way, because you get a chance to record your work and get paid for it, instead of maybe having it in a scrapbook on your shelf over your bed in your room, hidden safe from the public eye and ear. If you get famous, then of course the salary is a big plus. The disadvantage of this job might be the working hours, although it doesn't have to be, if you know how to plan and structure your time. But we all know that not all musicians are great at that, so it depends on who you are, what kind of personality you have. ...read more.

How hard do you have to work, and how much do you need to know? Today, it is expected that, as an artist, you would know about the music computer soft wares and that you are able to record yourself, but if everyone does it, will there even be a higher standard in the music that is released? Is it good that it is so accessible for everyone? Maybe, yes, then everyone gets a chance to showcase his or her music without having to be signed to a record company. But then, what if you need support or help to record something? What if you want to get promoted or you need someone to handle the legal and financial business. A record company will provide all that and more for you, so it is really not all that bad. And how safe is it anyway to distribute music over the internet? There is really no security. It is a dilemma and I must say myself that I am confused about what is the best. People are hungry for a revolution of some kind in the whole music industry, but can anyone point out which way to go or how the new way should be? -Probably not. But all this is fairly new, so maybe in a couple of years things will be clearer and we will be able to work out how to shape the music industry so that composers and publishers are happy. The playing field is wide open. ?? ?? ?? ?? Eva Guttesen 1 ...read more.