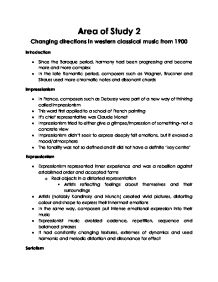 Area of Study 2 Changing directions in western classical music from 1900 Introduction * Since the Baroque period, harmony had been progressing and became more and more complex * In the late Romantic period, composers such as Wagner, Bruckner and Strauss used more chromatic notes and dissonant chords Impressionism * In France, composers such as Debussy were part of a new way of thinking called impressionism * This word first applied to a school of French painting * It's chief representative was Claude Monet * Impressionism tried to either give a glimpse/impression of something- not a concrete view * Impressionism didn't seek to express deeply felt emotions, but it evoked a mood/atmosphere * The tonality was ...read more.

* Expressionist music avoided cadence, repetition, sequence and balanced phrases * It had constantly changing textures, extremes of dynamics and used harmonic and melodic distortion and dissonance for effect Serialism * In the 1920s, Arnold Sch�enberg made up a completely different way of composing called serialism * There are 3 main composers of serialism: o Arnold Sch�enberg o Alban Berg o Anton Webern * Sch�enberg treated all 12 notes of the chromatic scale as equal to each other * The basis of each composition is a row/series consisting of the 12 tones of the octave in an order which the composer chooses * The tones of the series may be used successively (a melody) ...read more.

in any octave- this is part of the effect Minimalism * Minimalism became popular in the USA in the 1960s (after the experimental movement) * It started out as a reaction against serialism * Many minimalist composers wrote in the serialist style. However, they find that this method of composing didn't allow them to express themselves * There are 3 main principles of minimalism o Drone- a sustained sound o Phasing- when 2 or more versions of a sound or musical motif are playing simultaneously but slightly out of synchronisation o Repetition- the restatement of a section * The main composers of minimalism are: o Steve Reich o Philip Glass o Terry Riley o La Monte Young ...read more.

This is a very concise but accurate description of 3 musical styles. The writer could have gone into more detail especially in the minimalism section. The writer uses musical vocabulary accurately and confidently.