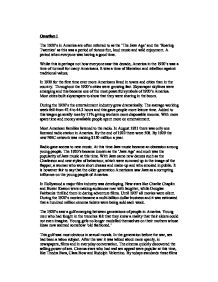 The 1920's in America are often referred to as the 'The Jazz Age' and the 'Roaring Twenties' as this was a period of riotous fun, loud music and wild enjoyment. A period when everyone was having a good time.

Question 1 The 1920's in America are often referred to as the 'The Jazz Age' and the 'Roaring Twenties' as this was a period of riotous fun, loud music and wild enjoyment. A period when everyone was having a good time. Whilst this is perhaps not how everyone saw this decade, America in the 1920's was a time of turmoil for many Americans. It was a time of liberation and rebellion against traditional values. In 1920 for the first time ever more Americans lived in towns and cities than in the country. Throughout the 1920's cities were growing fast. Skyscraper skylines were emerging and this became one of the most powerful symbols of 1920's America. ...read more.

The 1920's became known as the 'Jazz Age' and such was the popularity of Jazz music at this time. With Jazz came new dances such as the Charleston and new styles of behaviour, which were summed up in the image of the flapper, a woman who wore short dresses and make-up and who smoked in public. It is however fair to say that the older generation Americans saw Jazz as a corrupting influence on the young people of America. In Hollywood a major film industry was developing. New stars like Charlie Chaplin and Buster Keaton were making audiences roar with laughter, while Douglas Fairbanks thrilled them in daring adventure films. ...read more.

By todays standards these films would seem very tame, but in 1920's America they were considered very daring. Nevertheless it was true that sex outside marriage became much more common at this time than in the past. The emergence of Motor Car was also a key factor in 1920's America. It gave people a great deal of freedom. It helped cities to grow by opening up the suburbs - people could now commute by car. It allowed people to drive to cinemas and other entertainment sites. It allowed the younger generation to escape the gaze of their parents. It took Americans to an increasing range of sporting events, beach holidays, shopping trips, picnics in the country, or simply on visits to their friends and family. ...read more.