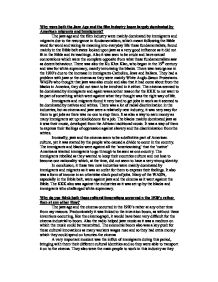 Why were both the Jazz Age and the film industry boom largely dominated by American migrants and immigrants?

Why were both the Jazz Age and the film industry boom largely dominated by American migrants and immigrants? The jazz age and the film industry were mainly dominated by immigrants and migrants due to the resurgence in fundamentalism, which meant following the Bible word for word and taking its meaning into everyday life these fundamentalists, found mainly in the Bible belt states looked upon jazz as a very good influence as it did not fit in the Bible and its teachings. Also it was seen to be crude and have sexual connotations which were the complete opposite from what these fundamentalists saw as decent behaviour. There was also the Ku Klux Klan, who began in the 19th century and was for white supremacy, mainly terrorising the blacks. There was resurgence in the 1920's due to the increase in immigrants-Catholics, Jews and Italians. They had a problem with jazz or the cinema as they were mainly White Anglo-Saxon Protestants-WASPs who thought that jazz was also crude and also that it had come about from the blacks in America, they did not want to be involved in it either. ...read more.

The immigrants rebelled as they wanted to keep their countries culture and not lose to become one nationality which, at the time, did not seem to have a very strong identity. In conclusion, it these two new industries were mainly dominated by immigrants and migrants as it was an outlet for them to express their feelings. It also was a form of income in an otherwise shark pool of jobs. Many of the WASPs, especially in the Bible belt, were against jazz and the cinema as it went against the Bible. The KKK also was against the industries as it was set up by the blacks and immigrants who challenged white supremacy. Why do you think both these cultural innovations occurred n the 1920's rather than at any other time? The jazz age and the cinema occurred in the 1920's rather at any other time from nay reasons. Predominately it was linked to the invention boom, as without these inventions occurring, like the cinemograph, it would have been very difficult for the cinema industrial to boom. Also the radio helped jazz music as it was a medium on which the music could be transmitted. ...read more.

As jazz had been classified as indecent, the speakeasies, which were breaking rules, allowed it to be played and so pushing it further into American social life. Also, as it was the end of WW1, and many of the youth were rebelling against their parents as they believed them to have caused the grave mistakes in WW1, and caused the great loss of life. They pushed boundaries and tried to differ from previous ideas of culture. In conclusion, jazz and cinema boomed in the 1920's because there was a great influx of immigrants and there was the migration to the north of blacks. There were also inventions which allowed the ideas to spread, and also that people had more money to spend so they could go to the cinema. The opening of speakeasies meant that jazz was played which would not have happened if prohibition, in 1919, had not been introduced. Also if the KKK and fundamentalists had not been so discriminant in the 20's, then jazz may not have come about along with the cinema as they me from immigrants and blacks expressing themselves through outlet-mainly due to the discrimination from the two groups. ...read more.