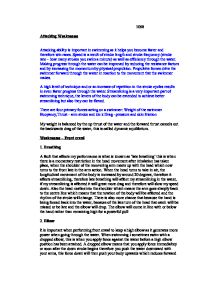 1068 Attacking Weaknesses Attacking ability is important in swimming as it helps you become faster and therefore win races. Speed is a result of stroke length and stroke frequency (stroke rate - how many strokes you swim a minute) as well as efficiency through the water. Making progress through the water can be improved by reducing the resistance factors and by increasing the momentum by physical propulsion. Propulsive forces drive the swimmer forward through the water in reaction to the movement that the swimmer makes. A high level of technique and or an increase of repetition in the stroke cycles results in even faster progress through the water. Streamlining is a very important part of swimming technique, the levers of the body can be extended to achieve better streamlining but also they can be flexed. There are four primary forces acting on a swimmer: Weight of the swimmer Buoyancy,Thrust - arm stroke and kic k Drag - pressure and skin friction My weight is balanced by the up thrust of the water and the forward thrust cancels out the backwards drag of the water, this is called dynamic equilibrium. Weaknesses - Front crawl 1. Breathing A fault that affects my performance is what is known as 'late breathing' this is when there is a momentary restriction in the head movement after inhalation has taken place, when the shoulder of the recovering arm meets up with the head which now turns to the front late in the arm action. When the head turns to take in air, the longitudinal movement of the body is increased by around 20 degrees, therefore it affects streamlining, therefore late breathing will affect my streamlining in the water, if my streamlining is affected it will great more drag and therefore will slow my speed down. Also the head nestles into the shoulder which means the arm goes sharply back to the centre line which means that the rotation of the body will be affected and the rhythm of the stroke will change. ...read more.

As you dive forward the hips raise and the head and shoulders lower at an angle, the angle of entry into the water is important to making sure the wave length is as long as possible, however it does need to be shallow. The arms and legs are now fully extended and momentarily the body is in a flat streamlined position 6. Breathing Don't lift your head to breathe. Keep it in the same position at all times. As your hands squeeze on the inscull, they lift your shoulders up and forward; it is often described as the "shoulder shrug"; and upper body lift carries your mouth clear of the water. You should move your whole body as a single unit, including your head. This means that the breath is taken on the insweep and then breath out as the arms recover to the streamline position. Elite Performance Front crawl 1. Breathing A technique that can help an athlete swim at a higher performance level is proper breathing techniques. Breathing correctly can make the swimmer swim faster and with less fatigue. Competitive swimmers take in one breath and gradually let it out over three to four strokes. As the race progresses and the swimmer becomes tired, less oxygen from those breaths reach the muscles. It is possible to teach the body to run on less than normal levels of oxygen. Elite performers generally use the 'breath holding' technique, this is needed in competition's. Correct measure to sort out the breathing would be to follow the thumb throughout the arm cycles. By using this type of breathing method, it will help to perfect the technique. The distance you swim will decide what sort of breathing you would use, short distances, try to breather as little as possible, longer distances would need a constant alternate breathing pattern throughout the durance of the race. 2.Arms The catch stage is the first stage the hand reaches full extension, with a very slight bent elbow the elbow not higher than the hand. ...read more.

By losing self confidence before a game it can lead to a bad performance and this may lead to increased anxiety. By having low levels of self efficacy I feel that motivation drops and the amount of effort applied will fall. Also my commitment and effort may drop and this will affect my performance and training dramatically. Information processing Anxiety/ over arousal Trait anxiety refer to the general disposition of an individual to perceive situations as threatening, just before a competition I feel really nervous which means I feel I am unable to mentally prepare as I should be, I lose concentration focus on other unimportant things, become very tensed and feel I do not listen to my coach but constant concern's about my performance. There are two types of anxiety cognitive and somatic, cognitive anxiety is experienced before an event and it involves the performer's thoughts and worries concerning his or her ability to complete the task successfully. This anxiety is what affects me most. Somatic anxiety is physiological responses where you are placed in a situation and are unable to complete the task successfully. My attentional narrowing decrease, this is when arousal theories directly relate to my ability to focus on relevant cues. I tend to focus on irrevlant cues are my concentration is misdirected, for example I will have a slow start of the blocks or a slow changeover. This is known as attentional wastage and it decreases my performance. Section B : Physical and physiological factors Acceleration It is important when completing short distance swimming races for example 50m and 100m that you have power coming off the blocks and out of turns also power to gain advantage over performers. I feel I have a problem with anaerobic fitness and that the last sprint of the race is poor as I lack power and acceleration to finish well. ATP/PC system Long term training methods Section B strategic and tactical weaknesses - elite performance Section B: psychological and physiological weaknesses :elite performance Section B : Physical and physiological factors :elite performance ...read more.