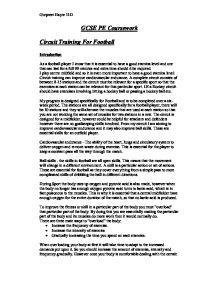 GCSE PE Coursework Circuit Training For Football Introduction As a football player I know that it is essential to have a good stamina level and one that can last for a full 90 minutes and extra time should it be required. I play centre midfield and so it is even more important to have a good stamina level. Circuit training can improve cardiovascular endurance. A complete circuit consists of between 8-15 stations and the circuit must be relevant for a specific sport so that the exercises at each station can be relevant for that particular sport. I.E a Hockey circuit should have exercises involving hitting a hockey ball or passing a hockey ball etc. My program is designed specifically for Football and is to be completed over a six-week period. The stations are all designed specifically for a football player, there will be 10 stations and they will alternate the muscles that are used at each station so that you are not working the same set of muscles for two stations in a row. The circuit is designed for a midfielder, however could be helpful for attackers and defenders however there are no goalkeeping skills involved. From my circuit I am aiming to improve cardiovascular endurance and it may also improve ball skills. These are essential skills for an outfield player. Cardiovascular endurance - The ability of the heart, lungs and circulatory system to deliver oxygen and remove waste during exercise. This is essential for the player to keep a constant pace all the way through the match. Ball skills - the skills in football are all open skills. This means that the movement will change in a different environment. A skill is a particular action or set of actions. These are essential for football as they cover everything from a simple pass to more complicated skills of dribbling the ball in different directions. ...read more.

These will be completed for the entire 6-week program. I have made sure that I do not do the same activity for two days in a row, I have also entered a swim into the activity list, this will further help to evade tedium. However before I start the exercise I will do the tests, which are normally completed on a Sunday, just to show what level I am currently at. The test that is to be done is: Cooper 12 minute run This test will show how I am doing and whether or not I am making progress in the areas that I intended to. The Cooper run will show if my stamina level is improving. This MUST be done before my six-week period of exercise begins to show my current stamina level and will be used as a guide to show how much I am improving. Performing: Monday Circuit Tuesday Run Wednesday Rest Thursday Swim Friday Circuit Saturday Rest Sunday Tests This was the regime I intended to follow for the 6 weeks of my investigation. There were a few days in the 6-week period where the regime was not followed perfectly to plan, however for the majority of the 6-week period it was followed very closely to how it was planned. Days where the program was not followed correctly will be looked into with further detail in my evaluation. The 12-minute cooper run was completed 7 times in full, because I had to do one test before the investigation began to see what level of stamina I was at to begin with. Below are the results for the first week of events for my circuit activities and the final weeks results of the circuit activities. Week 1 Station 1- Pyramid run. This was completed successfully in week one, however I planned not to time this event. Station 2- Sit-ups. I completed 67 sit-ups inside the 2-minute time allowed. ...read more.

Thus giving a clear indication that some improvement was made. The improvement would have been clearer to see had the training program been over a longer period of time, for example 10 weeks. Overall I felt that my Training program was a success and I also enjoyed carrying it out, and truly believe it has improved my fitness level! At first I felt, it was rather difficult and I found it tough to get into the routine of the training program, but I stuck at it, and after a week it became second nature to me, and I had no problems with doing the exercise that was set for that particular day! The only thing that I'd change given the chance to do my training program again would be to extend the length of the training program! I would increase it from 6 weeks to 10 weeks this would give clearer indication of the improvements made and also allow me to introduce "progression" and "overload". Also if I had only dealt with improving my stamina level, the results would have been clearer and more of an improvement would have been made. However tedium would have played a bigger part, for there are fewer activities that I would have been able to take part in. This would result in me feeling bored and unmotivated, results would be hindered. My body didn't change very much anatomically due to the fact I already participate in a lot of sporting activity during the week, so my muscles, tendons and ligaments would not have become any larger. Perhaps if the program was to be done over a series of 2 months, I would have noticed a change in the strength of muscles, tendons and ligaments. So the main change I would adopt given the opportunity to carry out this program again would be to lengthen the time period it was conducted over. I believe it should have been 12 weeks, this amount of time would give a much clearer indication of any improvements and would have allowed me to see improvements that were made anatomically! Gurpreet Hayre 11D ...read more.