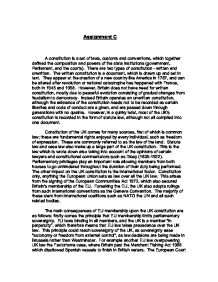 A constitution is a set of laws, customs and conventions, which together defined the composition and powers of the state institutions (government, Parliament, and the courts).

Assignment C A constitution is a set of laws, customs and conventions, which together defined the composition and powers of the state institutions (government, Parliament, and the courts). There are two types of constitution - written and unwritten. The written constitution is a document, which is drawn up and set in text. They appear at the creation of a new country like America in 1787, and can be altered after revolution or national catastrophe has happened with France, both in 1945 and 1958. However, Britain does not have need for written constitution, mostly due to peaceful evolution consisting of gradual changes from feudalism to democracy. Instead Britain operates an unwritten constitution, although the existence of the constitution needs not to be recorded as certain liberties and code of conduct are a given, and are passed down through generations with no qualms. However, in a quirky twist, most of the UK's constitution is recorded in the form of statute law, although not all compiled into one document. Constitution of the UK comes for many sources, first of which is common law; these are fundamental rights enjoyed by every individual, such as freedom of expression. These are commonly referred to as the law of the land. Statute law and case law also make up a large part of the UK constitution. This is the law which is wrote down also taking into account of the opinions of certain lawyers and constitutional commentators such as Dicey (1835-1922). Parliamentary privileges play an important role allowing members from both houses to go unhindered throughout the duration of their duty being performed. The other impact on the UK constitution is the international factor. Constitution only, anything the European Union sets as law over all the UK law. This arises from the signing of the European Communities Act 1972, which also secured Britain's membership of the EU. Forsaking the EU, the UK also adopts rulings from such international conventions as the Geneva Convention. ...read more.

And the cabinet system whereby the effective head of this government is not the head of state but a prime minister presiding over a cabinet composed of ministers over whose appointment and removal he or she has control. The fusion of the "governing" and "democratic" spheres of political activity gives Parliament its importance. In a Parliamentary system like the UK, the Prime Minister must control a majority within at least the House of Commons, however in a Presidential system such as the United States, the president need not have a majority, nor be a representative of the controlling party as the President is elected separately to the congress. As the President cant rely on a strong party majority to ensure the passage of legislation, therefore the President has to manage a balancing act between the demands of different interest groups in order to achieve his objectives and promises to the electorate. On the other hand the President has the power to veto any legislation passed by congress. In the UK the Prime Minister has no power of overrule in regards to Parliament. The American Cabinet contains the heads in chief from the main departments who are responsible to nobody other than the President; consequently the US cabinet has little power in comparison with it British counterparts. Parliament is the legislative section of the British political system. It is an asymmetric bicameralist system (consisting of two unequal parts), the House of Commons and the House of Lords, of which the Commons is the most dominant. The House of Commons holds five fundamental roles; representation, legislation, scrutiny and influence of the executive, debate of contemporary issues, and recruitment to government. The House of Lords holds two extra roles as the highest court in the land and constitutional safeguards. The principle function of the Commons can be grouped under four headings: those of Legitimisation, Scrutiny and Influence, Representation and Recruitment. ...read more.