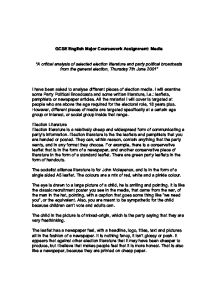 GCSE English Major Coursework Assignment: Media "A critical analysis of selected election literature and party political broadcasts from the general election, Thursday 7th June 2001" I have been asked to analyse different pieces of election media. I will examine some Party Political Broadcasts and some written literature, i.e.: leaflets, pamphlets or newspaper articles. All the material I will cover is targeted at people who are above the age required for the electoral role, 18 years plus. However, different pieces of media are targeted specifically at a certain age group or interest, or social group inside that range. Election Literature Election literature is a relatively cheap and widespread form of communicating a party's information. Election literature is the the leaflets and pamphlets that you are handed or posted. They can, within reason, contain anything that the party wants, and in any format they choose. For example, there is a conservative leaflet that is in the form of a newspaper, and another conservative piece of literature in the form of a standard leaflet. There are green party leaflets in the form of handouts. The socialist alliance literature is for John Moleyenux, and is in the form of a single sided A5 leaflet. The colours are a mix of red, white and a pinkie colour. The eye is drawn to a large picture of a child, he is smiling and pointing. It is like the classic recruitment poster you see in the media, that came from the war, of the man in the hat, pointing, with a caption that goes some thing like "we need you", or the equivalent. ...read more.

In one of the memorable image from the broadcast, we see a woman in a crowded train. At this point there is no music, just ambient noises of a train and its passengers. The ambient noise is loud and very exaggerated, as were the amount of people. There was ambient and relevant noise in all of the memorable images and moving film we are shown. This broadcast has a very seventies pop video feel. There are lots of pop-up boxes or picture-in-picture. All of the pictures had a big bright yellow border that faded out to the picture below it. Yellow is the parties colour so it ties into the parties identity, as does the fact that the little pictures show different points of view, since they are liberal. Yellow, is said to represent priority. There is one especially memorable image of the OAP on the train. There are quite a few visual effects in operation here. The camera angle for example, it is high up and titled to the left, as if there is no other place to put it. It also has the feel of, 'what they didn't want you to see' because you imagine it being hidden up in luggage on the luggage shelf. The picture is not in full colour, or black and white it is sort of a smoky feel. This adds to the idea of a hidden camera, and also shows that train may be full of cigarette smoke. ...read more.

The background music is very repetitive. It is the consistent echoing ding. It is drum and base, which is a very natural music form. The green party are also, a very natural party. There are quite a few memorable images in this broadcast aswell. Alot of these revolve around the mistreating of animals. Quite often people care more for animals than for humans because animals, like children are small, fragile an, innocent and unable to make decisions for themselves. All the animals in this broadcast are baby animals, either kittens, puppies or piglets. You can see an image of some dirty pigs, that cant run free, then some clean pigs running free, then of some sausages. Now, this is highly emotive because when people see the pigs running free they think that it is 'sweet' but then they see sausages and make the connection between the 'cute little piggies' and the dead pigs meat being prepared. There are quite a few visual effects at work here, one of which is where things are blurred and bought to focus, and the reverse of that. This is confusing for the viewer. I think that the whole presentation had a camcorder sort of undercover feel. It is like 'the footage they don't want you to see' again. It makes it feel real and evidently honest. It can be completely staged and still appear to be real. Both forms of election communication are successful in informing people of the party's information, the advantage of leaflets being that they can be much more localized. ...read more.