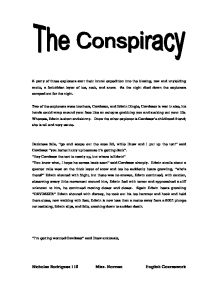 A party of three explorers start their brutal expedition into the blazing, raw and unyielding arctic, a forbidden layer of ice, rock, and snow.

A party of three explorers start their brutal expedition into the blazing, raw and unyielding arctic, a forbidden layer of ice, rock, and snow. As the night died down the explorers camped out for the night. Two of the explorers were brothers, Cavdazer, and Edwin Dingle, Cavdazer is vast in size, his hands could wrap around your face like an octopus grabbing you and sucking out your life. Whereas, Edwin is short and skinny. Drew the other explorer is Cavdazer's childhood friend; she is tall and very astute. Darkness falls, "go and scope out the area Ed, while Drew and I put up the tent" said Cavdazer "you better hurry up because it's getting dark". "Hey Cavdazer the tent is nearly up, but where is Edwin" "You know what, I hope he comes back soon" said Cavdazer sharply. Edwin strolls about a quarter mile west on the thick layer of snow and ice he suddenly hears growling, "who's there?" Edwin shouted with fright, but there was no answer, Edwin continued, with caution, observing every little movement around him, Edwin fled with terror and approached a cliff unknown to him, he continued moving closer and closer. Again Edwin hears growling "CAVDAZER!" Edwin shouted with dismay, he took out his ice hammer and hook and held them close, now walking with fear, Edwin is now less than a metre away from a 500ft plunge not realising, Edwin slips, and falls, crashing down to sudden death. "I'm getting worried Cavdazer" said Drew anxiously, "So am I, I think we better go and find him, no need to worry, Edwin always messes about, hiding in some cave or something you know Ed, the old fool" Said Cavdazer with a big smirk on his face. ...read more.

said Drew, "Do you know another way around?" said Edwin sharply, "NO" snapped Drew, "Well then we better hurry up, the polar bears are getting away!" shouted Cavdazer. One by one they crossed the thin ice, "ok, I'm over, who's next?" shouted Cavdazer, "Ok I'm coming over next" shouted Drew, Drew stepped onto the ice, "DREW WATCH OUT!" shouted Edwin, Edwin ran quickly across the ice like a high speed train, grabbed hold of Drew and dragged her onto the snow, "the ice is cracking, RUN!" shouted Drew "RUN! the polar bear is catching up with you, grab my hand, just a little further!" called Cavdazer, as they ran for their life, the ice was cracking rapidly, they were about a metre away from the end. "AARRRRRHHHHHHHHHHHHHH!" shouted Drew and Edwin as they fell into an ice pool, "DREW!, EDWIN!" shouted Cavdazer, as he ran, he managed to pull Drew and Edwin out, both Drew and Edwin are in shock due to the coldness, "let's get you two wrapped up, we have got to press on" said Cavdazer. They continued following the polar bears, the polar bears went into a secret cave, "LOOK! there, the polar bear is standing up, and punching in a password" called Drew, "Wow, it's amazing, how!, I mean who! is doing that," said a confused Cavdazer "hey look at the tag, it's lighting up, and so is the remote from the US government, give me that Ed" said Drew. At first Edwin was hesitant to give the remote control to Drew, but Edwin had begun to realise that his secret was out, and the only way he could prevent it from going further, was to kill and destroy all the evidence, hence, get rid of Drew and Cavdazer. ...read more.

Then today, when I came with you, I realised that the secret was out, and I had to destroy all the evidence that linked the government conspiracy to what was happening, so I turned the bears against you, but all didn't go to plan, as the government had already found out that someone else knew about this. It was too late for me to do anything about it, so I feared for my life and for the lives of my family." After the truth was told, Drew and Cavdazer, realised that the situation they were in, was irreversible, and that they were all hanging onto life by a short thread, there was no time to hate, there was only time to try and survive. By this time, the bears had turned their attention back onto them, this time however, the bears were on the rampage, and were destroying anything that was in their sight. One of the bears grabbed hold of Drew and started to violently shake her, there was no way that she could escape the grip of the bear. Edwin grabbed hold of the bear from the back and wrestled him to the ground, therefore, relaxing the grip on Drew. Edwin had now crumpled under the weight of the bear, eventually he stopped breathing, Edwin had died trying to save Drew. However, while Drew was being attacked, Cavdazer had managed to escape. There was still one person out there who knew the truth about the government conspiracy, little did Drew and Edwin know, that Cavdazer was too, working for the government, as an undercover explorer. This shows that the truth is still out there about the government conspiracy, but where, no-body knows. The snow began to fall swiftly and heavily, covering up any evidence that there may have been. Nicholas Rodrigues 11S Miss. Norman English Coursework ...read more.