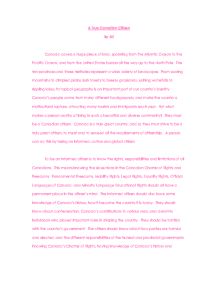 A True Canadian Citizen By Ali Canada covers a huge piece of land, spanning from the Atlantic Ocean to the Pacific Ocean, and from the United States border all the way up to the North Pole. The ten provinces and three territories represent a wide variety of landscapes. From soaring mountains to dimpled plains, lush forests to breezy grasslands, rushing waterfalls to rippling lakes, its topical geography is an important part of our country's identity. Canada's people come from many different backgrounds, and make the country a multicultural rapture, attracting many tourists and immigrants each year. But what makes a person worthy of living in such a beautiful and diverse community? They must be a Canadian citizen. Canada is a truly great country, and so they must strive to be a truly great citizen, to meet and to exceed all the requirements of citizenship. A person can do this by being an informed, active and global citizen. To be an informed citizen is to know the rights, responsibilities and limitations of all Canadians. ...read more.

Everyone in Canada should contribute to the country through their taxes, because the money that we pay to the government goes to the country's important social programs, such as health care and education. Another key part of being an active citizen is taking part in the democratic process. In order for a democracy to work, it is imperative that all people take part not only in voting, but also in investigating the party and policies of the party that they intend to vote for. If everyone does not vote, then it is not a democracy, because what the majority of the country wants cannot be known. Although voting is important, it is not the only way that citizens can change something within the democratic system. Another way to make a difference and to be an active citizen is to join an interest group. An interest group is a group of citizens who share a common goal. They use various methods to try to get the government to see their views. Being a part of an interest group can be a very rewarding experience, and members will probably learn a lot about Canada's political landscape. ...read more.

They can take action at home in many ways. Recycling cans and bottles to help the environment, starting an anti-discrimination campaign in their school or workplace, and joining an organization that embodies their morals and beliefs are just a few ways that the global citizen can make a difference in their own community. The global citizen should also take affirmative action in trying to end and prevent further problems in developing or war torn countries. They can do this in several ways including sending money to organizations which have stations in the countries and writing letters to politicians urging them to become involved in the global issues. It is clear that being a global citizen is important to make up a good Canadian citizen. "I affirm that I will be faithful and bear true allegiance to Her Majesty Queen Elizabeth II, Queen of Canada, Her Heirs and Successors, and that I will faithfully observe the laws of Canada and fulfill my duties as a Canadian citizen." This is the Canadian Oath of Citizenship, a pledge that all Canadians should try to meet. It's only fair that because our country offers us so much, that we try to satisfy its requirements by being an informed, active and global citizen. ...read more.