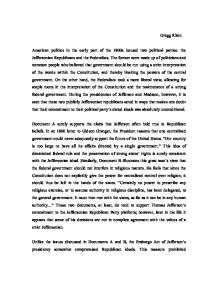 American politics in the early part of the 1800&amp;#146;s, housed two political parties; the Jeffersonian Republicans and the Federali

Gregg Klein American politics in the early part of the 1800s housed two political parties: the Jeffersonian Republicans and the Federalists. The former were made up of politicians and common people who believed that government should be run using a strict interpretation of the words within the Constitution, and thereby limiting the powers of the central government. On the other hand, the Federalists took a more liberal view, allowing for ample room in the interpretation of the Constitution and the maintenance of a strong federal government. During the presidencies of Jefferson and Madison, however, it is seen that these two publicly Jeffersonian republicans acted in ways that makes one doubt that their commitment to their political party's stated ideals was absolutely unconditional. Document A surely supports the claim that Jefferson often held true to Republican beliefs. In an 1800 letter to Gideon Granger, the President reasons that one centralized government could never adequately support the future of the United States. "Our country is too large to have all its affairs directed by a single government." ...read more.

trade. This Act went against the Jeffersonian view of keeping open overseas commerce. Document C illustrates how the Act annoyed the British and stunted overseas trade with them. This gives rise to the idea that Jefferson was not quite as much of a Jeffersonian Republican as most may have thought. Document G refers to another instance of Jefferson deviating from the strict constructionist view. In this 1816 letter to S. Kercehval, the then-former President explains how he thinks that, along with time and a changing culture, the Constitution needs to be a living body that can change and adapt to different times. "...I am certainly not an advocate for frequent and untried changes in laws and constitutions....But I know also, that laws and institutions must go hand in hand with the progress of the human mind." This goes against the bases of the Jeffersonians, since his words say essentially that the Constitution should not be interpreted too narrowly. During his term in office, Madison faced the decision of whether or not to introduce a draft for the War of 1812 against England. ...read more.

Here, the President vetoes a bill that would have the government fund construction of national roads and water transportation. Madison does agree that it is important to build these routes - "I am not unaware of the great importance of roads and canals and the improved navigation of water courses...." However, he even more strongly feels that it is not within the central government's authority (as stated by the Constitution) to undertake the action. "...such a power is not expressly given by the Constitution..." Since Madison stuck to the strict limits of the Constitution, he was surely thinking here as a true Jeffersonian Republican. Both Presidents Jefferson and Madison were leaders of the Jeffersonian Republicans, a group of politicians that viewed the Constitution as an uncompromising document giving very distinctly defined powers to the government. As indicated above, at times these men did act as true Jeffersonians, while though at other times they behaved a bit more like Federalists. Perhaps they felt that, in the end, no document is perfect and that their sound practical judgments would have to occasionally substitute for a blind belief in an ideal. Perhaps this also helped to make them effective Presidents. ...read more.