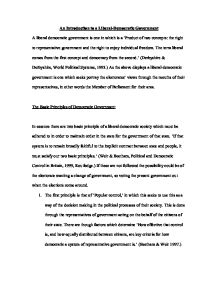 An Introduction to a Liberal-Democratic Government

An Introduction to a Liberal-Democratic Government A liberal democratic government is one in which is a 'Product of two concepts: the right to representative government and the right to enjoy individual freedom. The term liberal comes from the first concept and democracy from the second.' (Derbyshire & Derbyshire, World Political Systems, 1993.) As the above displays a liberal-democratic government is one which seeks portray the electorates' views through the mouths of their representatives, in other words the Member of Parliament for their area. The Basic Principles of Democratic Government In essence there are two basic principle of a liberal democratic society which must be adhered to in order to maintain order in the state for the government of that state. 'If that system is to remain broadly faithful to the implicit contract between state and people, it must satisfy our two basic principles.' (Weir & Beetham, Political and Democratic Control in Britain, 1999, Routledge.) If these are not followed the possibility could be of the electorate wanting a change of government, so voting the present government out when the elections come around. 1. The first principle is that of 'Popular control,' in which this seeks to use this as a way of the decision making in the political processes of their society. This is done through the representatives of government acting on the behalf of the citizens of their state. ...read more.

(The features came from Derbyshire & Derbyshire, World Political Systems, 1993.) Although the above are the key features of a liberal democracy there also however other things that the government must consider in order for it to see out its term of office successful. These involve things such as the government running 'Regular elections that respect the principle of 'one person, one vote; one vote, one value.' Although similar to the above it is far more specific and related to the concept of the individuals' freedom to decide and choose on whom manifesto he feels is the most suited to his/her ideas. It must also guarantee the aspect of 'Civil rights and individual rights,' this can include things such as freedom of speech on particular issues, for example the protest of students in London in November against the proposed introduction of top up fees to higher education, also the right to be innocent until you are proven guilty for a particular crime committed. The Purported Benefits of a Liberal Democratic Government A liberal democracy if worked well can have benefits to a number of parts to the state. This can include the citizens, the trade, international relations and most importantly an overall successfully run country. 1. Many people have written in the past that democracy is the best way to run a country because it involves the people of the state to its near full capacity, or as Winston Churchill stated it 'Is the least worst,' way of which to run a country. ...read more.

Firstly if it were not to follow the ideas for a new government set out in its manifesto it could lead to rumblings from not only the opposition but from the electorate as well. It can also lead to international arguments to, shown only this year when Britain went to war allied with America against the will of France and Germany. This caused political conflict both on and off shore. Conclusions It is fair to say that after my readings that liberal democracy is an extremely important part of international society in terms of trade and international political agenda. I feel to that without a democratic society it would be extremely difficult for decisions to be implemented in states previously mentioned. It is also fair to suggest that in democratic states if the executive were to not listen to the electorate they would face political backlashes from interest groups concerned about particular issues that could harm their people or the aspect of which they are trying to defend. On the whole though through my reading the reference at the beginning of this report 'Product of two concepts: the right to representative government and the right to enjoy individual freedom. The term liberal comes from the first concept and democracy from the second,' (Derbyshire & Derbyshire) has proved to be perfectly suited to the idea of a liberal democratic society. ...read more.