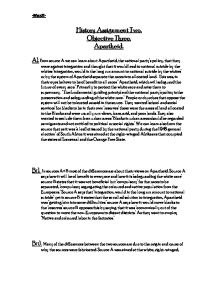 History Assignment Two, Objective Three, Apartheid. A). From source A we can learn about Apartheid, the national party's policy, that they were against integration and thought that it would lead to national suicide by the whites 'integration, would in the long run amount to national suicide by the whites' or by the system of Apartheid separate the races into allocated land. This was, in their eyes believe to be of benefit to all races ' Apartheid, which will safeguard the future of every race.' Primarily to protect the white race and raise them to supremacy. ' The fundamental guiding principle of the national party's policy is the preservation and safeguarding of the white race.' People or churches that oppose the system will not be tolerated as said in the source. They wanted 'school and social services' for blacks to be in their own 'reserves' these were the areas of land allocated to the Blacks and were usually run-down, bare, arid, and poor lands. They also wanted to seclude them from urban areas 'Blacks in urban areas should be regarded as migrants and not entitled to political or social rights.' ...read more.

Source G is particularly useful as it gives us an indication of how education and the standard of education were in this time; around the time of the Bantu education act was passed. So it was not only a case of giving one pupil more than the other it was how much was given to the entire school as all students were separated because of other laws and acts commonly known as 'petty apartheid.' The source tells us that, at first glance, the white pupils generally received more than any other pupil from another race. 'Annual average spending on school pupils per head, White - �63.92, Black - �8.99.' This tells us that all people weather Black or White; were entitled to an education it also tells us that the Whites were held in the highest regard - therefore received a better education, and Blacks the lowest - therefore received a lower standard of education. This would not be caused by not allowing Black schools to have a high standard of education but simply not giving them enough money to be able to have good schools. ...read more.

My personal opinion however agrees with source K in that it was both, unworkable and harmful to South Africa and its people. After all the government had been through to establish Apartheid the country was ridiculed when they failed to convict any one of 156 men and women in the Treason Trial! Also in Sharpeville where 67 people were killed and many more injured! As stated in 'Encyclopedia Britannica yearbook 1960' this also embarrassed the country and government. Apartheid was unworkable as it is human instinct to protect what life you have or for a better life which was the case for many people and why movements like the PAC and ANC were founded. As shown in source J Apartheid also did not have the support of all other countries of the world and their views seemed very similar to that of the Nazi's. When the AWB came along, an ultra right-winged organization 'Afrikaner Resistance Movement' around the end of the term of Dr Verwoerd they refused to integrate with the native Africans or anyone non-white. They attacked sometimes killing black people to try to prevent the fall of the system of Apartheid. All this concludes that apartheid was harmful and unworkable to South Africa! -MazZ- ...read more.