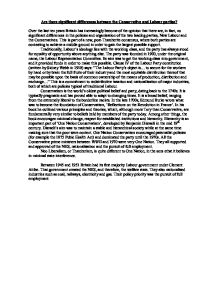 Are there significant differences between the Conservative and Labour parties?

Are there significant differences between the Conservative and Labour parties? Over the last ten years Britain has increasingly become of the opinion that there are, in fact, no significant differences in the policies and organisation of the two leading parties, New Labour and the Conservatives. This is part of a new, post-Thatcherite consensus, where both parties are contesting to achieve a middle ground in order to gain the largest possible support. Traditionally, Labour's ideology lies with the working class, and the party has always stood for equality of opportunity above anything else. ...read more.

This is a commitment to redistributive taxation and nationalisation of major industries, both of which are policies typical of traditional Labour. Conservatism is the world's oldest political belief and party, dating back to the 1740s. It is typically pragmatic and has proved able to adapt to changing times. It is a broad belief, ranging from the extremely liberal to the borderline racists. In the late 1700s, Edmund Burke wrote what was to become the foundation of Conservatism, 'Reflections on the Revolution in France'. In his book he outlined various principles and theories, which, although more Tory than Conservative, are fundamentally very similar to beliefs held by members of the party today. ...read more.

One Nation Conservatism encouraged paternalist policies (for example the 1875 Pubic Health Act) and dominated the party until the 1970s. All the Conservative prime ministers between WWII and 1970 were very One Nation. They all supported and approved of the NHS, nationalisation and the pursuit of full employment. Neo Liberalism, or Thatcherism, is quite different to One Nation, in the sens ethat it believes in minimal state interference. Between 1945 and 1951 Britain had its first majority Labour government under Clement Attlee. That government created the NHS, and therefore, the welfare state. They also nationalised industries such as coal, railways, electricity and gas. Their policy priority was the pursuit of full employment ...read more.