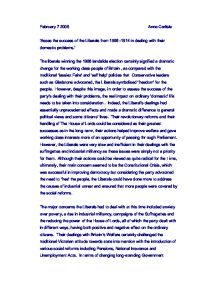 'Asses the success of the Liberals from 1906-1914 in dealing with their domestic problems.'

February 7 2005 Anna Carlisle 'Asses the success of the Liberals from 1906-1914 in dealing with their domestic problems.' The liberals winning the 1906 landslide election certainly signified a dramatic change for the working class people of Britain, as compared with the traditional 'lassiez Faire' and 'self help' policies that Conservative leaders such as Gladstone advocated, the Liberals symbolised 'freedom' for the people. However, despite this image, in order to assess the success of the party's dealing with their problems, the real impact on ordinary 'domestic' life needs to be taken into consideration. Indeed, the Liberal's dealings had essentially unprecedented effects and made a dramatic difference to general political views and some citizens' lives. Their revolutionary reforms and their handling of The House of Lords could be considered as their greatest successes as in the long-term, their actions helped improve welfare and gave working class interests more of an opportunity of passing through Parliament. However, the Liberals were very slow and inefficient in their dealings with the suffragettes and industrial militancy as these issues were simply not a priority for them. Although their actions could be viewed as quite radical for the time, ultimately, their main concern seemed to be the Constitutional Crisis, which was successful in ...read more.

Essentially, it was an effective idea but the Act was heavily criticised by both workers and organisations such as Trade Unions because in practice, relatively few were covered by the Act. Many criticised the scheme for deducting money from already low wages and the second part of this Act was only aimed to help people affected by seasonal or cyclical unemployment. Furthermore, the Trade Boards' act of 1907 set a minimum wage for a small number of sweated trades, many domestic workers still had few rights and no trade union. Despite these restrictions, the Liberals were successful in changing the government's views to state intervention, thus bringing to attention the need to care for people's welfare, which has led to an increase in social security ever since the Liberals first introduced these reforms. The Liberals dealings with social reform can be considered as one of their most successful measures but this doesn't mean they were entirely successful in dealing with all the fundamental domestic problems apparent during this time. Certainly, it could be said that the Liberals did little to address the fact that real wages weren't rising as fast as prices during the period of high inflation 1911-1912, showing that they were not genuinely concerned with the root causes of the industrial militancy during this period. ...read more.

The Liberals were essentially concerned with the passing of the Act in order to push the Home Rule Bill through Parliament but again, introducing Home Rule for Ireland did little to help the ordinary working class citizen. The Act also meant the Liberals lost the majority in the 1910 election, showing that although the Act did have positive long-term benefits, the majority were not concerned with the Act and even from the party's perspective, in the short-term, it couldn't be considered an overall success. Taking into account the extent of the difficulties faced by the Liberals during this period, the party did make some dramatic change that certainly transformed the political and social situation. On the whole, although some Acts were restrictive, the reforms passed offered almost instantaneous benefits compared with the lack of government intervention when the Liberals first came to power. Although many workers weren't interested in the Parliament Act, it was advantageous the working class in the long-term as it meant more reforms helping them could be passed. However, the Liberals seem less successful with their dealings of the Suffragettes and Industrial Militancy and given the relatively large amount of time and effort spent on the Constitutional Crisis, more could have been done to directly help working-class citizens involved with these issues. ...read more.