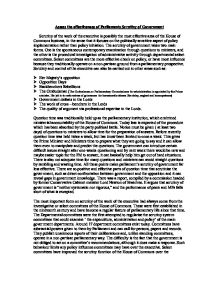 Assess the effectiveness of Parliaments Scrutiny of Government.

Assess the effectiveness of Parliaments Scrutiny of Government Scrutiny of the work of the executive is possibly the most effective area of the House of Commons business, in the sense that it focuses on the politically sensitive aspect of policy implementation rather than policy initiation. The scrutiny of government takes two main forms. One is the spontaneous contemporary examination through questions to ministers, and the other is the procedural investigation of administrative activity through departmental select committees. Select committees are the more effective check on policy, or have most influence because they traditionally operate on a non-partisan ground from a parliamentary prospective. Scrutiny and control of the executive can also be carried out in other areas such as: > Her Majesty's opposition > Opposition Days > Backbenchers Rebellions > The Ombudsman (The Ombudsman or Parliamentary Commissioner for administration is appointed by the Prime minister. ...read more.

This gives the Prime Minister and Ministers time to prepare what they are going to say and it can allow them even to manipulate and predict the questions. The government can introduce certain difficult issues straight after one-weeks questioning and by next week there would be new and maybe easier topic for the PM to answer, it can basically help him get out of hard situations. There is also not adequate time for many questions and ministers can avoid straight questions by rambling and wasting time. All these points make parliament's scrutiny of government far less effective. There are so positive and effective parts of question time that scrutinise the government, such as direct confrontation between government and the opposition and it can reveal gaps in government knowledge. ...read more.

The difficulty is the fact that the government is not obliged to act on a committee's recommendations, although it does make a response. Such behaviour limits any policy influence committees may have over the executive. Select committees have improved the scrutiny function of the House of Commons over the executive. The results have been such things as now the house of commons is better informed about government work through MPs specialised critical activity in select committees. Also Committees have had a direct effect on the behaviour of government in the knowledge that their affairs are publicly scrutinised. Although difficult to count exactly, the government later adopts the reports of select committees and proposals may find their way into improvements in policy. But executives in parliamentary systems are generally reluctant to see increased powers given to scrutiny committees for fear of losing policy initiatives to what becomes government by committee. ...read more.