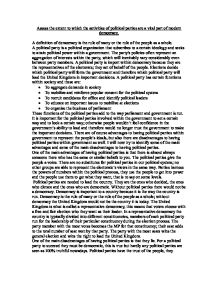 Assess the extent to which the activities of political parties are a vital part of modern democracy. A definition of democracy is the rule of many or the rule of the people as a whole

Assess the extent to which the activities of political parties are a vital part of modern democracy. A definition of democracy is the rule of many or the rule of the people as a whole. A political party is a political organization that subscribes to a certain ideology and seeks to attain political power within a government. The party's policies often represent an aggregation of interests within the party, which will inevitably vary considerably even between party members. A political party is import within democracy because they are the representatives of the electorate; they act of behalf of the people. Elections decide which political party will form the government and therefore which political party will lead the United Kingdom in important decisions. A political party has certain functions within society and these are: * To aggregate demands in society * To mobilize and reinforce popular consent for the political system * To recruit candidates for office and identify political leaders * To educate on important issues to mobilize at elections * To organize the business of parliament These functions of the political parties add to the way parliament and government is run. ...read more.

The United Kingdom is what is called a representative democracy, this means that voters choose with a free and fair election who they want as their leader. In a representative democracy the country is typically divided into different constituencies, members of each political party run for the leadership of their particular constituency during the election process. The party member with the most votes becomes the MP for that constituency; their seat adds to the total number of seat won by that party. The party with the most seats wins the general election and wins the right to lead the United Kingdom. One of the main disadvantages of having political parties is that they lie. For a political party to succeed they must be democratic, this is true but hardly any political parties are seen as 100% truthful nowadays. Political parties have the trust of the people, they produce a manifesto of what they will achieve while in power and the public relies on this as the truth. However, many political parties, although they do produce a manifesto leave certain things out of it, they do this because they want to be elected. ...read more.