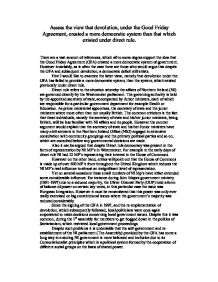 Assess the view that devolution, under the Good Friday Agreement, created a more democratic system than that which existed under direct rule.

Assess the view that devolution, under the Good Friday Agreement, created a more democratic system than that which existed under direct rule. There are a vast amount of references, which all to some degree support the idea that the Good Friday Agreement (GFA) created a more democratic system of government. However invariably, as is often the case there are those who would argue that despite the GFA and subsequent devolution, a democratic deficit still exists. First I would like to examine the latter view, namely that devolution under the GFA has failed to provide a more democratic system, than the system, which existed previously under direct rule. Direct rule refers to the situation whereby the affairs of Northern Ireland (NI) are governed directly by the Westminster parliament. The governing authority is held by the appointed secretary of state, accompanied by Junior ministers, each of which are responsible for a particular government department for example Health or Education. As prime ministerial appointees, the secretary of state and the junior ministers where more often than not usually British. ...read more.

Despite such problems it is undeniable that the self-government and re-establishment of the NI parliament (The Assembly) provided by the GFA has come a long way in ensuring NI government is more balanced and inclusive due to its Consociationalist principles which is a political system formed by the cooperation of different social groups on the basis of shared power. The assembly itself is directly involved in government and ministers are nominated to government through an electoral system called the 'd'hondt' system whereby seats are won singly and indeed successfully on the basis of the highest average. This method requires that the number of seats awarded to each party in the assembly, be divided initially by one and thereafter by the number of Executive committee seats won by the party by one. This rather tedious system provides smaller parties with the opportunity of winning seats by means of 2nd and 3rd preference votes. In essence it is a form of proportional representation provides a power-sharing situation. It is undeniable that such a system is both democratic and indeed fair. ...read more.

acts as a forum for discussion on issues which involve two or more ministers in order to recommend a common position where necessary. This is a further example of increased representation. In conclusion it can be argued that the GFA achieved its primary goals, which included the protection of rights and interests among all sides of NI's communities and moreover paved the way for a return of devolution and representative government. Indeed in this sense the GFA empowered local politicians to make local decisions, instead of a secretary of state and their junior ministers, who as we have seen were usually British politicians and therefore detached from the issues of governing NI and its people. Despite these undeniable successes the 1st assembly was plagued with the politics of sectarianism and regularly became bogged down and eventually suspended on several occasions. Nevertheless despite these problems, the NI assembly and executive debated, passed and initiated a range of legislation directly concerned with NI. Indeed personally I believe these devolved institutions of government created on the whole a much more democratic system that that which existed under direct rule. ...read more.