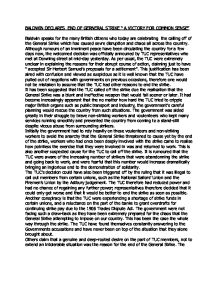 BALDWIN DECLARES END OF GERNERAL STRIKE " A VICTORY FOR COMMON SENSE" Baldwin speaks for the many British citizens who today are celebrating the calling off of the General Strike which has caused sevre disruption and chaos all across the country. Although rumours of an imminent peace have been circulating the country for a few days now, the welcomed decision was officially announed by TUC representatives who met at Downing street at mid-day yesterday. As per usual, the TUC were extremely unclear in explaining the reasons for their abrupt course of action, claiming just to have " accepted Sir Herbert Samuel's proposals for a settlement". This justification has been aired with confusion and viewed as suspicious as it is well known that the TUC have pulled out of negotions with governments on previous occasions, therefore one would not be mistaken to assume that the TUC had other reasons to end the strike. It has been suggested that the TUC called off the strike due the realisation that the General Strike was a blunt and ineffective weapon that would fail sooner or later. ...read more.

The TUC's decision could have also been triggered off by the ruling that it was illegal to call out members from certain unions, such as the National Sailors' Union and the Firemen's Union by the Astbury judgement. The TUC therefore had reduced power and had no chance of regaining any further power; representatives therefore decided that it could only get worse and that it would be better to end the strike as soon as possible. Another conspiracy is that the TUC were experiencing a shortage of strike funds in certain unions, and a reluctance on the part of the banks to grant overdrafts for continuing strike pay due to the 1906 Trades Dispute Act. The government were not facing such a draw-back as they have been extremely prepared for the chaos that the General Strike attempting to impose on our country. This has been the case the whole way through the strike. The TUC have found themselves constantly answering to the Governments accusations and have never been on top of the situation that they alone brought about. ...read more.

It is thought that now with such restricted power that the TUC pose no further threat to our country and having lost to the Government shall no longer persist in trying to rebel. The miners will obviously react in a bitter manner to yesterday's announcement. They should however keep in mind that only should the Government never have been associated let alone blamed with their poor working conditions, as the mine industry consists of private buisnesses run by mine owners, not the Government, but that it is due to hard economic times and a decline in British industry that they are in such a state. It is ridiculous to blame the Government as it has no control over the economic delines and inclines of Britain. With the strike finally over, the Government's hard work has payed off and the Government have come out of the dispute as the victourious heroes, whereas the TUC now are seen as failures. The country shall never forget how many citizens pulled together to prevent the distruption that the General Strike had intended to cause. The country should be grateful to all the non-strikers and workers that kept industries, facilities and services running as they would normally during this painful and hard time. ...read more.