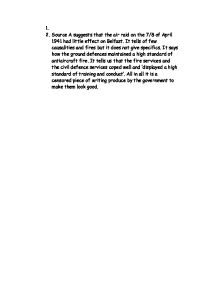 1. 2. Source A suggests that the air raid on the 7/8 of April 1941 had little effect on Belfast. It tells of few causalities and fires but it does not give specifics. It says how the ground defences maintained a high standard of antiaircraft fire. It tells us that the fire services and the civil defence services coped well and 'displayed a high standard of training and conduct'. All in all it is a censored piece of writing produce by the government to make them look good. 3. -1 There is many ways in which these sources tell different accounts on the air raids on Belfast. The first main obvious one is that source 'A' is about the first raid while the others are about the second raid. Sources 'A' and source 'B' were released to the public by the government while the source 'C' and source 'D' were confidential accurate reports, which were not intended for the public's eyes. Sources 'A' and 'B' are vague they are none specific and are here to raise moral of the people. 'A' and 'B' make the raids sound like they had little effect on Belfast while in Brian Barton says that in total over one thousand were killed or injured during these attacks this is hardly a small number of lives effected unlike what it says in source 'A' 'the number of casualties was small'. Sources 'C' and 'D' are factual and contain figures, places and dates. These two sources show the extent of the raids. Source 'B' suggests that only a few districts were affected while source 'C' gives tells specific details on the areas and areas damaged. Source 'C' says how the fires were big and how the damage was far greater than it makes out in the two previous sources. Sources 'A' and 'B' mention unspecific small numbers while the others mention big specific big numbers. ...read more.

5. Source 'A' is an official statement realised via the governments the press about the first raid. Information was censored for many various reasons to stop the information getting into enemy hands to maintain a high sense of morale and public sprit one of the main reasons was to keep the public on the governments side. This is a censored source this source has limited content. It gives no specifics barely mentions areas of damage and plays down numbers of causalities describing them as small. However McGimpsey states that 13 were killed 23 were severely injured and 58 slightly injured this is from an external source 'Bombs on Belfast'. His statistics are very different than source 'A' were it says only a few were fatal. A few means only 1 or 2 not 13 the source was so general in content to ensure that panic was not a result it also means to me that it was used to maintain high morale among the public. The language of the source was aiming to maintain a high standard of morale, calm and reinsurance this source shows a sense and calm and good work throughout the attack. This source praises the fire service, claims that Belfast stood up to the enemy however it doesn't mention to us hoe accurate the bombing had been. It also doesn't mention if they manage to hit any planes or take them down, this is very unlikely as they had so few guns so predictably they didn't mention this as if they did hit any they would surely mention this to say how great the marksmen were. Belfast also didn't have any search lights and had been described as the most unprotected city in the U.K. such information would certainly not of been given to the public as it would have been far to sensitive to the publics eyes. It would have damaged the cities morale greatly. ...read more.

Only after the second blitz that the government supplemented the fire fighting equipment from the mainland. We see the same problem in other sources, source 'F' shows that September 1939 Belfast had only 16 antiaircraft guns. MacGimpsey in Bombs on Belfast says that 'the defences of the city without search lights and with few antiaircraft guns offered little resistance'. However in source 'A' the official statement says that 'heavy barrage of antiaircraft fire was maintained by the ground defences' such obvious contradictions make it difficult to compile an accurate picture Sources 'A' and 'B' hide the true impact of the raid due to censorship it talks about 'some districts suffering some damage' in fact the damage was wide spread with some streets completely obliterated source 'C' 'D' 'G' and 'H' show the true impact of the second raid those first 3 sources were secret government documents and are likely to be accurate. One of the greatest problems in constructing and accurate picture has to be the problem of reliability in other word knowing which source we can trust and those which we cannot. Government are not openly critical, source D' explains a shortage of shelters and doesn't explain the full situation. All the same sources which we hoped would be accurate may not be as they may not disclose all the facts. It is difficult to interoperate events from the past or to understand them. With out having a wide range of sources avadible. It is difficult to produce a full and accurate reconstruction when all the facts are no known. added to this problem of reliability there are others such as bias, exaggeration, censorship, hindsight and memory lose however it is possible to build up an accurate picture via cross-referencing sources and by using a mixture of primary and secondary sources; you always have to be aware of strengths and weaknesses within each source ...read more.