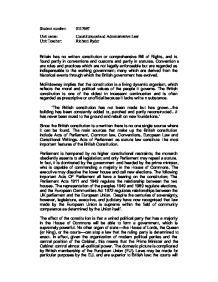 Britain has no written constitution or comprehensive Bill of Rights, and is found partly in conventions and customs and partly in statutes.

Student number: 0117697 Unit name: Constitutional and Administrative Law Unit Teacher: Richard Ryder Britain has no written constitution or comprehensive Bill of Rights, and is found partly in conventions and customs and partly in statutes. Conventions are rules and practices which are not legally enforceable but are regarded as indispensable to the working government; many which are derived from the historical events through which the British government has evolved. McEldowney implies that the constitution is a living dynamic organism, which reflects the moral and political values of the people it governs. The British constitution is one of the oldest in incessant continuation and is often regarded as prescriptive or unofficial because it lacks written substance. 'The British constitution has not been made but has grown...the building has been constantly added to, patched and partly reconstructed...it has never been razed to the ground and rebuilt on new foundations.' Since the British constitution is unwritten there is no one single source where it can be found. The main sources that make up the British constitution include Acts of Parliament, Common law, Conventions, European Law and Constitional Writings. Acts of Parliament as statute law constitute the most important features of the British Constitution. ...read more.

There is a classic distinction drawn by Bryce on flexible and rigid constitutions. In a flexible constitution there is no difference between ordinary and constitutional laws. In terms of legal principle and procedures, the latter may be amended or repealed as easily as the former eg Act of Union with Scotland1707, which amongst other things abolished the English Parliament and instituted a new British Parliament in Westminster. Provisions in this legislation have been amended by legislation passed by the Westminster Parliament in the normal way. On the other extreme is the constitution of the United States of America, which without a doubt is one of the most rigid constitutions in the world. Under the U.S constitution, formally adopted in 1789, an amendment maybe proposed in one of two ways. Either two thirds of all members (not just the members present) of each house of Congress may agree that certain amendments are necessary or they will be forced to call a special convention to consider amendments when petitioned to do so by the legislatures of two thirds of all the 50 states. However some have argued that a written constitution without a commitment to its principles and civil justice has often proved to be a temporary or rapidly reversed gesture. ...read more.

In defence of our present constitution, many would argue that this system has served us well over the centuries, that our parliamentary traditions have combined stability and flexibility and that we should not cast away in a minute what has taken generations to build (' ...has not been made but has grown... the building has been constantly added to, patched and partially reconstructed'). However I strongly believe that it should be within our rights to demand a system that will improve consistency and steadiness in the quality of our government. There should also be reforms to assist in entrenching, clarifying and widening the present separations between the executive, the legislature and the judiciary as the branches of our government are over fused and no real separation exists. No constitution is or can be perfectly symmetrical, what it can be and must be is generally accepted as both fair and useable. 1 Beatty v Gillbanks (1882) 9 QBD 308 Queens Bench Division 2 Allan ' The Politics of the British Constitution: a response to Professor Ewing's paper 2000 3 Constitutional and Administrative Law unit guide University of East London 4 Stanley Baldwin - Altavista web engine, look for constitutional and administrative law 5 Constitutional and Administrative Law, third edition, Michael Allen, Brian Thompson and Bernadette Walsh ...read more.