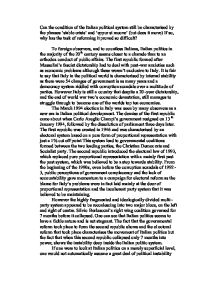 Can the condition of the Italian political system still be characterised by the phrases 'stable crisis' and 'eppur si muove' (but does it move) If so, why has the task of reforming it proved so difficult?

Can the condition of the Italian political system still be characterised by the phrases 'stable crisis' and 'eppur si muove' (but does it move) If so, why has the task of reforming it proved so difficult? To foreign observers, and to countless Italians, Italian politics in the majority of the 20th century seems closer to a charade than to an orthodox conduct of public affairs. The first republic formed after Mussolini's fascist dictatorship had to deal with post-war anxieties such as economic problems although these weren't exclusive to Italy. It is fair to say that Italy in the political world is characterised by internal stability as there were 54 changes of government is as many years and a democracy system riddled with corruption scandals over a multitude of parties. However Italy is still a country that despite a 20-year dictatorship, and the end of world war two's economic devastation, still manages to struggle through to become one of the worlds top ten economies. The March 1994 election in Italy was seen by many observers as a new era in Italian political development. The demise of the first republic came about when Carlo Azeglio Ciampi's government resigned on 13th January 1994, followed by the dissolution of parliament three days later. The first republic was created in 1946 and was characterised by an electoral system based on a pure form of proportional representation with just ...read more.

However, although the Italians may have been justified in thinking that a fundamental change had taken place in their economic and political systems (with Italy now officially the 5th biggest global economy), cracks began to appear within the governing coalition. The Christian Democrats felt they had supported Craxi long enough and they wanted the role of premier to cede to a Christian Democrat. However, it soon became clear that Craxi had no intention of playing the supporting role. The Christian Democrats withdrew their support precipitating early elections in June 1987. Amintore Fanfari returned as caretaker Prime Minister seeming to indicate a reversion to the previous style of government. This shows that although one can characterise Italian politics as 'moving', it does not necessarily mean it will be moving forward. Italy is politically unique, not only because it had one of the only 'pure' Proportional representation systems in Europe but also because it has two organisations that need to be considered: The Mafia and the Catholic Church. The organised crime networks in Italy bear different labels. Camorra in Campania, N'drangheta in Calabria and most famously, Mafia in Sicily. Historians, anthropologists and criminologists debate its specific historical origins but most agree it is based on traditional patterns of patron-clientelism and that it burgeoned in response to the weaknesses of the administrative and judicial structures of the state. ...read more.