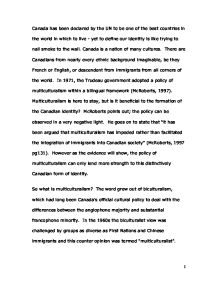 Canada has been declared by the UN to be one of the best countries in the world in which to live - yet to define our identity is like trying to nail smoke to the wall. Canada is a nation of many cultures. There are Canadians from nearly every ethnic background imaginable, be they French or English, or descendent from immigrants from all corners of the world. In 1971, the Trudeau government adopted a policy of multiculturalism within a bilingual framework (McRoberts, 1997). Multiculturalism is here to stay, but is it beneficial to the formation of the Canadian identity? McRoberts points out; the policy can be observed in a very negative light. He goes on to state that "it has been argued that multiculturalism has impeded rather than facilitated the integration of immigrants into Canadian society" (McRoberts, 1997 pg131). However as the evidence will show, the policy of multiculturalism can only lend more strength to this distinctively Canadian form of identity. So what is multiculturalism? The word grew out of biculturalism, which had long been Canada's official cultural policy to deal with the differences between the anglophone majority and substantial francophone minority. In the 1960s the biculturalist view was challenged by groups as diverse as First Nations and Chinese immigrants and this counter opinion was termed "multiculturalist". ...read more.

The Canadiens had been accustomed to having their disputes settled before an unbiased judge, and were understandably perplexed at the ponderous workings of the British system of courts and trials. It was clear that the British government would have a monumental task in ruling the French people. Either the Canadiens would have to be bent to fit the British system, or the system manipulated to fit the Canadiens. The first attempt of the British Crown came in the form of the Royal Proclamation of 1763. It attempted to assimilate the Canadiens into the British way of life, forcing them to learn the language and new legal system, and allowing them very little say in how their colony was governed. The Act was a failure. Within a few years, it was replaced by the Quebec Act of 1774. Under this Act, the Canadiens were permitted to keep their way of life virtually intact, and to participate in their own government. Such freedom was essential if the British hoped to keep Quebec's loyalty in the face of the discord that was brewing in the Thirteen Colonies to the south of British North America. The Quebec Act kept the Canadiens loyal during the American Revolution, but caused dissent among the British Loyalists who fled to British North America following the Revolution. ...read more.

Canada's government also sponsors a number of programs to assist recently landed immigrants to become successfully integrated into Canadian society. Programs are offered to help immigrants both financially and socially. These programs encompass everything from basic to job-specific language training, loans and financial assistance, to organizations and volunteers dedicated to helping immigrants settle into their new life. Immigrants are permitted, even encouraged to retain the culture and traditions from their country of origin. It is apparent that multiculturalism is an integral part of the Canadian identity. It has influenced us throughout the history of our nation, and led the Canadian people to becoming a tolerant, freedom-loving society that respects the equality and identity of the cultures that comprise it. It is true that many Canadians share little in common: they may come from opposites ends of the world to live at opposite ends of a continent. For this reason, multiculturalism does not weaken our identity, multiculturalism is our identity. Colonization initiated it, history has proven it, and government policy has reaffirmed it. The policy of multiculturalism within a bilingual framework can only lend more strength to this distinctively Canadian form of identity. Kymlicka, Multicultural Citizenship: A Liberal Theory of Minority Rights, Oxford University Press, 1995. 280 pp. Reprinted in paperback 1996. Mark Charlton and Paul Baker, Contemporary Political Issues, second edition, Scarborough, Nelson Canada, 1994, p. 26). It is formally defined as "an educational program recognizing past and present cultural diversity in a society in promoting the equality of all cultural traditions"(Teevan and Hewitt, 1995). 1 ...read more.