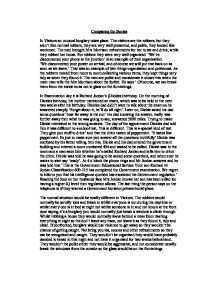 Comparing the Stories - Visitors and Examination

Comparing the Stories In Visitors an unusual burglary takes place. The visitors are the robbers, but they aren't like normal robbers, they are very well presented, and polite, they looked like workmen. The men brought Mrs Morrison refreshments for her to eat and drink, while they robbed her house. For robbers they were very well organized. 'We've disconnected your phone at the junction' is an example of their organisation. 'We disconnected your power on arrival, and of course we will put that back on as soon as we leave.' That was an example of two things organisation and politeness. As the robbers moved from room to room collecting various items, they kept things very tidy as when they found it. The men are polite and considerate it shows this when the main man tells the Mrs Morrison about the forfeit. He says ' Of course, we can break them from the inside so as not to glass on the furnishings. In Examination day it is Richard Jordan's (Dickies) birthday. On the morning of Dickies birthday, his mother mentioned an exam, which was to be held in the next two weeks after his birthday. Dickies dad didn't want to talk about the exam so he answered sharply 'Forget about it, he'll do all right'. Later on, Dickie asked his dad some questions 'how far away is the sun' his dad knowing the answer, really was further away then what he was going to say, answered 5000 miles. ...read more.

They wouldn't be polite either they would be aggressive, and not considerate usually break the windows from the outside so the glass would be on the furnishings. The normal situation in Examination Day would be different again. As it was our birthday you would normally have a happy day with people not trying to spoil it, especially your parents. You would be told a lot earlier if you had an exam which had been set by the government, and your parents would be supporting you throughout the run up to it. Not giving you false answers to easy questions. Setting you harder questions so you could try your hardest at getting them. Your parents wouldn't want you to do badly in exams but to do your best. The drink that they gave to Dickie they wouldn't give to real people, as it doesn't exist and if it did they wouldn't use it to decide a child's future at the age of 12. If at the age of 12 you had a higher IQ level then set by the Government you would not be killed for being brainy you would be praised. The events in Visitors are unbelievable. I find this is unbelievable because in normal live that just wouldn't happen. Burglars wouldn't come up to your house knocking on the door telling you are going to be burgled by them. ...read more.